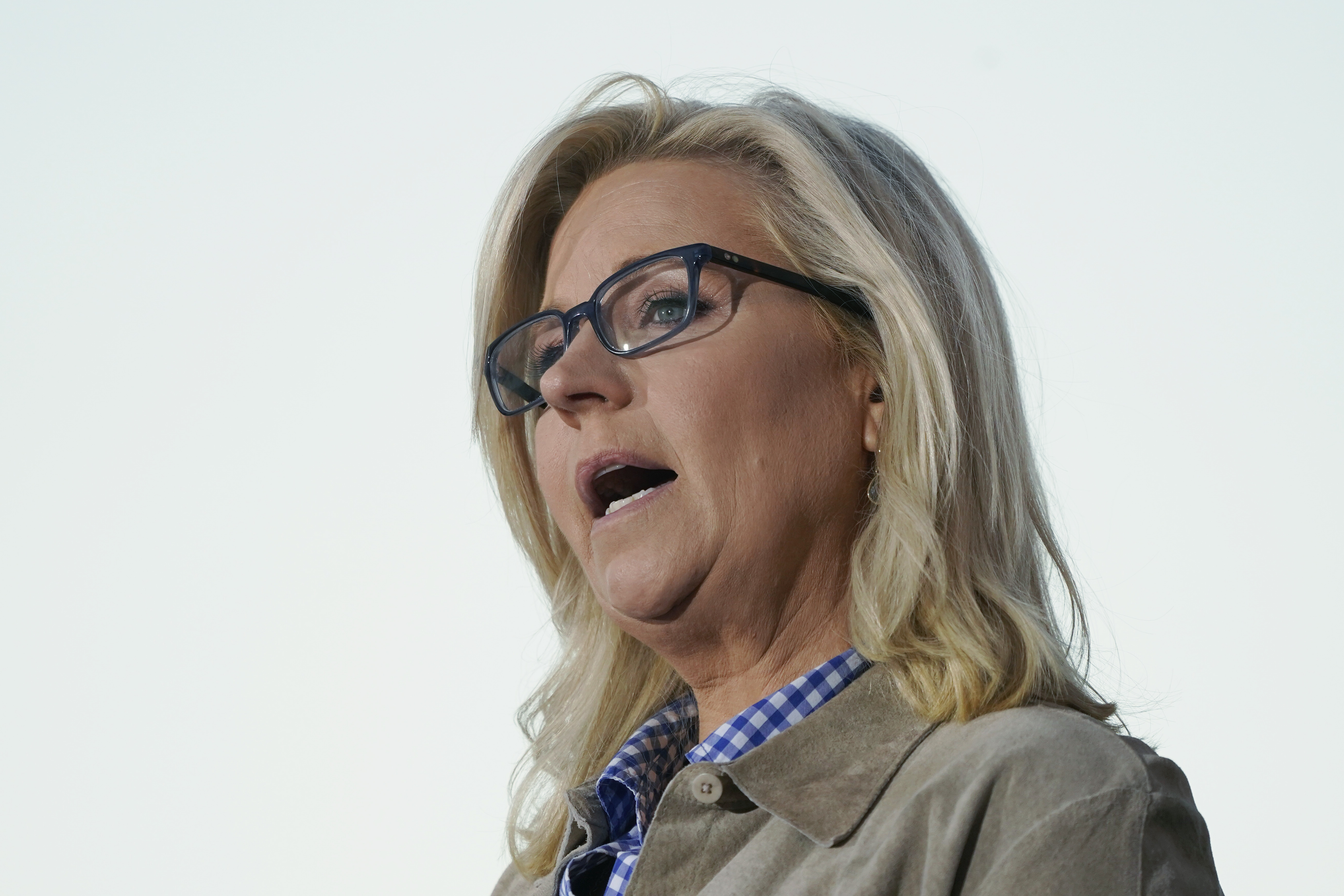 JACKSON, Wyo. — Rep. Liz Cheney lost her GOP primary in Wyoming Tuesday night, falling to a Donald Trump-endorsed challenger after becoming a vocal Republican dissident against the former president following the Jan. 6 attack on the Capitol.

Cheney, who was seeking a fourth term, was defeated by Harriet Hageman, an attorney and former Cheney supporter who Trump selected last year as his chosen candidate to oppose her. Cheney’s vote to impeach Trump for inciting the Jan. 6 insurrection, her vocal defense of that vote and her leadership role on the House committee investigating the attacks and Trump’s actions made her Trump’s top political target in the midterms.

She made her opposition to Trump, whom she has repeatedly described as a threat to democracy, a core part of her political identity — and it consigned her to double-digit defeat in heavily pro-Trump Wyoming. But Cheney, who conceded to Hageman on Tuesday evening, signaled she wasn’t going away, telling supporters that Tuesday night was just the beginning.

“I have said since Jan. 6 that I will do whatever it takes to ensure that Donald Trump is never again anywhere near the Oval Office, and I mean it,” Cheney said at the close of her speech. “This is a fight for all of us together.”

Hailing from a state that voted for Donald Trump by more than 40 percentage points in 2020, Cheney is an often-lonely face of intra-party resistance against the former president. On Tuesday night, she cast her fight for the soul of her party as an existential one — repeatedly invoking the Civil War and President Abraham Lincoln as a model, while chastising Republican office-seekers who have followed Trump. 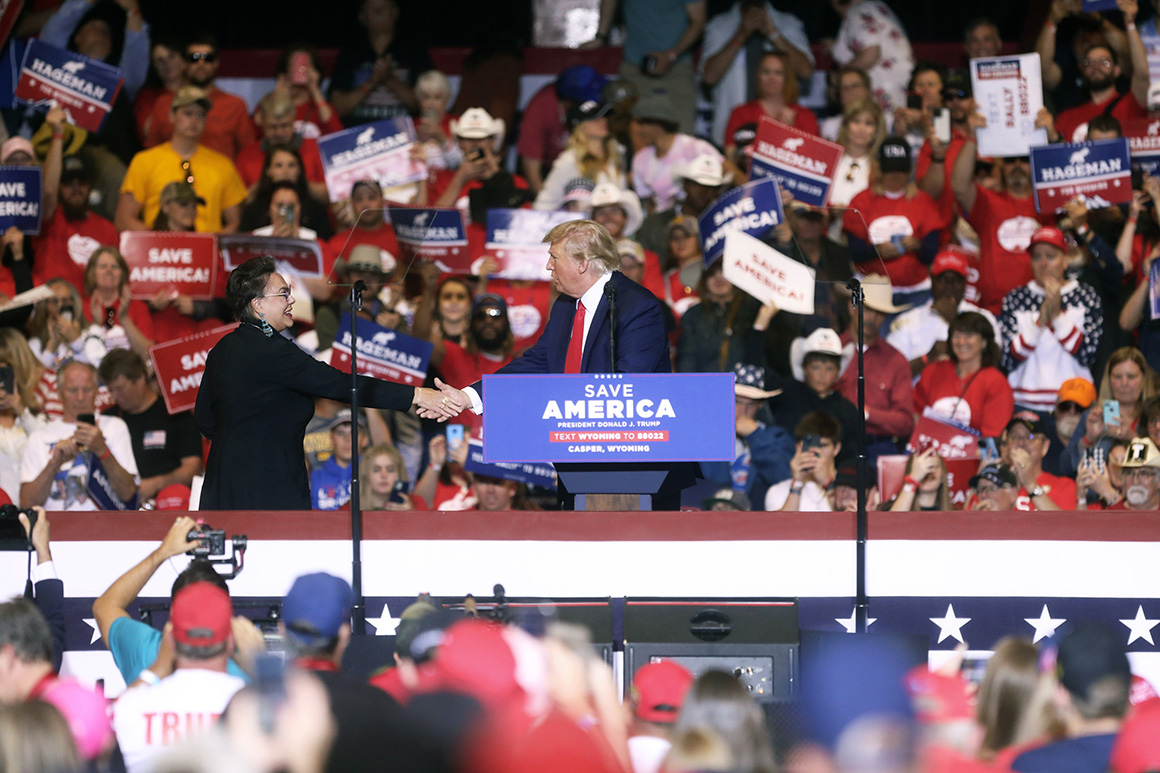 But even with Trump’s successful revenge mission, Cheney’s next steps after Tuesday night are shrouded in mystery. She did not explicitly make any announcements about future plans, but signaled that she would look to target election deniers within her own party while sounding like a presidential candidate in everything but name.

“This primary election is over, but now the real work begins,” she said. “It has been said that the long arc of history bends toward justice and freedom. That’s true, but only if we make it bend.”

It comes as her team takes increasing control over her anti-Trump message. Her campaign ducked most press when she was casting her ballot, heading at the last minute to a different polling place across town from where most of the media was camped out.

In lieu of the typical media coverage of a candidate casting a ballot, Cheney played pick-and-choose with news outlets: CBS News got advance notice to set up a location 15 minutes away at the Teton County Library with a camera and correspondent ready. Cheney later tweeted her own take on the moment, adding a veiled shot at Trump: “The challenges we are facing require serious leaders who will abide by their oath and uphold the Constitution- no matter what.”

A Cheney aide attributed the secrecy surrounding her polling place to security concerns, saying that her events are not “announced or advised beforehand except the rarest cases where we have been explicit that the time and location should not be published or shared.”

The moment fit a burgeoning pattern for Cheney: As her state’s pro-Trump GOP electorate prepares to give her the boot, she’s turning to a merry-go-round of legacy media outlets to help burnish her brand of opposition to the former president’s baseless lies about a stolen election.

Cheney also signaled that she will be going after not just Trump but his enablers within the Republican Party.

“Today, as we meet here, there are Republican candidates for governor who deny the outcome of the 2020 election, and who may refuse to certify future elections if they oppose the results. We have candidates for secretary of state who may refuse to report the actual results of the popular vote in future elections. And we have candidates for Congress, including here in Wyoming, who refuse to acknowledge Joe Biden won the 2020 election, and suggest that states decertify the result,” Cheney said, adding that “no American” should support them.

Cheney’s status as Trump’s top political enemy stems from being the highest-ranking Republican who voted to impeach him after the Jan. 6 insurrection, coupled with her role on the House select committee investigating the former president’s culpability for that day.

It has caused her once fast-rising House career to dramatically implode, fueling her ouster from GOP leadership and ostracization in the party generally. But Cheney’s efforts to take her message nationally, rather than locally, has prompted widespread speculation that it is now the groundwork of her plans to run for president — a prospect she has not dismissed.

“Nobody would piss off the entire state of Wyoming without another plan,” said Kasey Mateosky, a Republican running to be Teton County Commissioner.

Cheney’s race was the last outstanding primary race of the 10 House Republicans who voted to impeach Trump over his role in the Jan. 6 assault. Only six of those members sought reelection, and just two won their primary races and advanced to their general election — California’s David Valadao, who is in a swing district, and Washington’s Dan Newhouse — sending a clear signal of Trump’s iron grip over the party even out of office.

It is against those national political headwinds that Cheney has staked her future.

To House Republican colleagues and Jackson Hole residents alike, it was clear Cheney knew her role on the Jan. 6 panel — at the appointment of Speaker Nancy Pelosi — would cause irreparable damage inside her party. But she has leaned into the committee’s work anyway, co-chairing dramatic hearings on national TV.

And in a sign her campaign knows she has alienated much of her conservative support in the state, Cheney sought to encourage Democrats and independents to register as a Republican and participate in the GOP primary. It made for an odd coalition of now-supportive liberals — at least two Democratic members of Congress cut videos urging Wyoming Democrats to switch parties to back her — who have long despised the Cheney family and the old guard of the Republican Party.

Cheney had well-outraised her primary challenger, with the support of one-time party leaders like her father, former Vice President Dick Cheney, former President George W. Bush and Sen. Mitt Romney (R-Utah) — all of whom have seen their standing diminish amid the Trump-fueled takeover of the Republican Party. And while Cheney had spent millions trying to hold her seat, her fundraising has well outpaced what she has spent — leaving potentially millions in the bank for her future political plans.

Crossover voting is notoriously difficult to measure, and it’s even tougher to successfully pull off in any meaningful amounts. But voter registration records in Wyoming have shown at least a nominal increase in Republican registrants over the summer, while Democratic numbers ticked down.

The registration numbers were even more dramatic in Teton County, the bluest, most liberal part of the state. It is in this touristy, resort-filled part of Wyoming — now known for its wealthy out-of-towners pushing its less wealthy locals further out — that Cheney cast her vote on primary day. And it was Cheney’s best county on Tuesday night.

Palin vies for a comeback in Alaska

Tuesday’s other big election is in Alaska, where former Gov. Sarah Palin is vying for a political comeback. Palin is running in the special election to fill out the remainder of the late GOP Rep. Don Young’s term.

Palin’s time as a star at the center of the Republican Party burned hot and fast: Over the course of around three years, she was elected governor of Alaska by defeating the incumbent, ascended to the 2008 presidential ticket and ultimately resigned from office in 2009.

Her chance to return is complicated by Alaska’s new election format, with the special election being the first conducted under the new rules. In the state, all candidates now run in an all-party primary, with the top four advancing to a ranked-choice general election.

Palin finished in first in the June primary, followed by fellow Republican Nick Begich, the grandson of the late Democratic congressman of the same name, and former Democratic state Rep. Mary Sattler Peltola. (A fourth candidate who qualified dropped out.)

But results from the primary suggest that a ranked-choice “instant runoff” will be necessary, which would mean a winner won’t be known until state election officials conduct the ranked choice tabulation on Aug. 31. Palin took first place in June with just 27 percent support.

Regularly scheduled primaries for the November general election are also on Tuesday, including for a full term for the state’s at-large House seat. GOP Gov. Mike Dunleavy is also seeking reelection and facing a field that includes former Gov. Bill Walker, who is running as an independent.

And Sen. Lisa Murkowski (R-Alaska) is on the ballot, where both she and her Trump-endorsed opponent Kelly Tshibaka are advancing to a ranked-choice general election. Murkowski voted to convict Trump on the impeachment charges Cheney supported last year.

The new format in the state is expected to benefit Murkowski, who has a history in drawing a broader coalition of support — including her 2010 victory, where she won a statewide write-in campaign after losing the Republican Senate primary.