More Northerners seem to be expressing their anger at the ruling All Progressives Congress (APC), perhaps over the worrisome state of the country.

This is true after thousands flood from the nooks and crannies of the Northern region of the country with burning brooms in a solidarity walk in  a video that has gone viral on social media.

This publication understands that the action was taken days after a group of angry northerners (mostly children) were captured destroying the banner of the APC presidential candidate, Bola Tinubu, his running mate, Kashim Shettima and President Muhammad Buhari.

They threw stones at the campaign materials, shouting and causing a commotion at the scene. 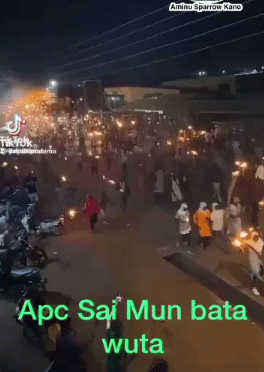 Meanwhile, the APC leader, Bola Tinubu  earlier on Wednesday met with Former President, Obasanjo as part of his consultation ahead of the 2023 presidential election.

The chopper of the former Governor of Lagos State landed at the Olusegun Obasanjo Presidential Library (OOPL), Oke Mosan, Abeokuta around 1 pm.

The Governor of Ogun State, Dapo Abiodun who was on the ground received Tinubu, while his Deputy, Noimot Salako-Oyedele and former governors Olusegun Osoba, Gbenga Daniel also welcomed their leader.

Tinubu immediately went straight into the closed-door meeting with Obasanjo.