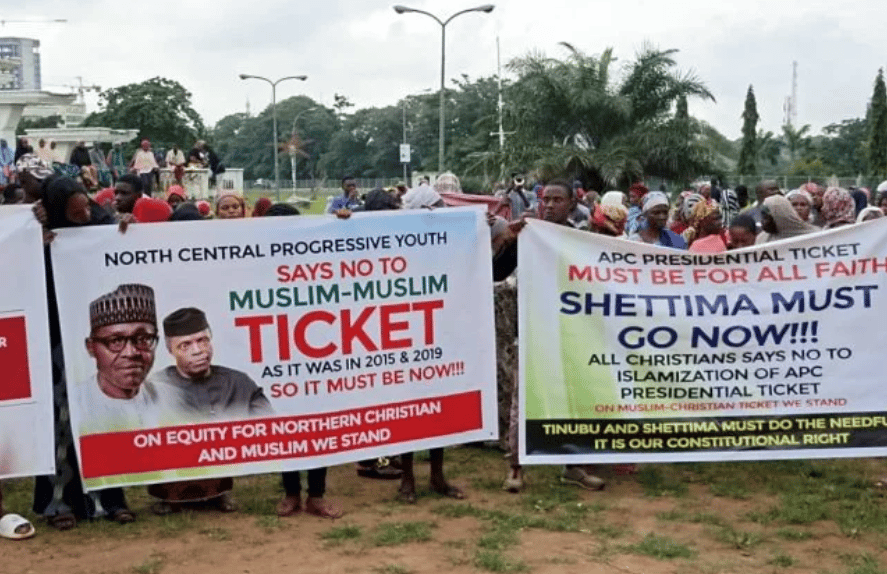 Youths of the All Progressives Congress (APC), under the aegis of North-Central Progressives Youth (NCPY), have described the party’s Muslim-Muslim Presidency as a sectional national ideology.

The youths made this known during a protest held which began at the Unity Fountain and culminated at the Presidential Villa.

Speaking with reporters, the President of NCPY, Musa Attah, said the choice of former Governor of Borno State, Kashim Shettima as the party’s Vice Presidential candidate was the wrong one.

Attah added that the choice of Shettima would be a hindrance to the victory of the party’s presidential candidate, Bola Tinubu, in the 2023 election.

He described Tinubu as a man loved and adored by Nigerians, thereby calling on the former Lagos governor to drop Shettima as his running mate.

Attah also urged President Muhammadu Buhari to prevail on Tinubu to replace Shettima with a Christian for the good of the party and Nigeria.

The NYCPY added that Tinubu has demonstrated capacity over the years and is primed to build on Buhari’s legacies.

Attah said, “Tinubu’s alliance with Shettima may just be his undoing. In the face of unprecedented disunity, the same-faith ticket is a disregard for the country’s fragility and would further polarise the nation. Sections 14 and 15 of the Constitution talk about Federal Character. The question is, does the choice of a Muslim-Muslim ticket fit into that Federal Character? As they say in law, you can’t come to equity without clean hands. He who wants equity must do equity. Is there equity in that Muslim-Muslim choice?

“The rejection of the same-faith ticket should not be seen as Christian objection but a protest by every Nigerian in favour of democracy which guarantees freedom of choice, freedom of expression, and freedom of worship. Nigeria is a secular state. Our forefathers were aware of this even before they designed the Constitution. And in making these choices, we must be sensitive to the sensibilities of the people. It shouldn’t be lorded over the people, to whom the power belongs.

“A Muslim-Muslim Presidency would mean a sectional national ideology to replace the liberty upon which Nigeria was established as a country. With Shettima, the APC is implying that Christians in the North are of no consequence in the scheme of things. We have a huge Christian population in the North-East and North-West. In the North-Central, the Christians are dominant. This is why Shettima must vacate this position.”