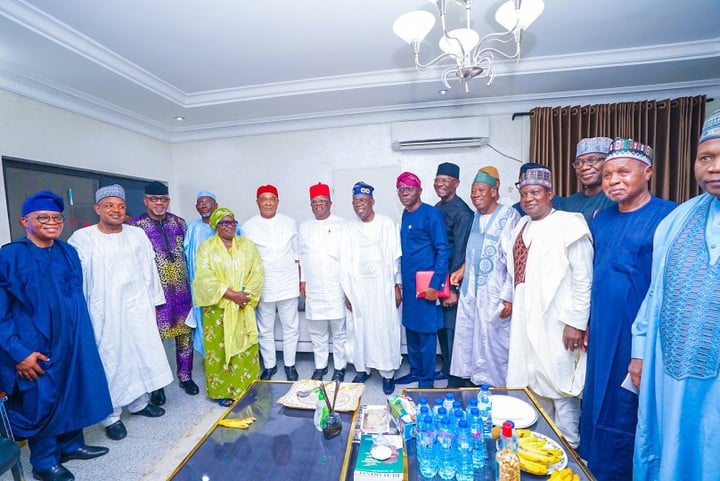 The details of the meeting between the presidential candidate of the All Progressives Congress (APC) and the governors of the party have emerged.

Naija News earlier reported that Tinubu met with the APC governors on Wednesday after addressing the party supporters at the MKO Abiola stadium, Abeokuta, the Ogun State capital.

In a chat with DAILY POST, a party source said one of the resolutions taken at the meeting was to appoint different roles for the party chieftains in the Presidential Campaign Council.

The removal of the national chairman of the Peoples Democratic Party (PDP), Iyorchia Ayu, will be one of the main agendas between the camps of the presidential candidate of the party, Atiku Abubakar, and Rivers State Governor, Nyesom Wike.

Recall that the PDP plunged into crisis after Atiku overlooked Wike and picked Governor Ifeanyi Okowa of Delta State as his running mate for the presidential election.

The Rivers governor, who came second in the party’s presidential primary, has refused to openly back the presidential ambition of Atiku.

Some top members of the party who are unhappy with the PDP leadership have also joined Wike in calling for the resignation of the party’s National Chairman.

But Ayu has rejected the calls, insisting that he was elected for a tenure of four years and was ready to serve it out.

It remains to be seen if Wike and Atiku’s camps will be able to come to any compromise as they meet again today (Friday) for reconciliation.

According to Daily Trust, Wike’s camp believe that with Ayu as the PDP’s national chairman, they will not get justice.