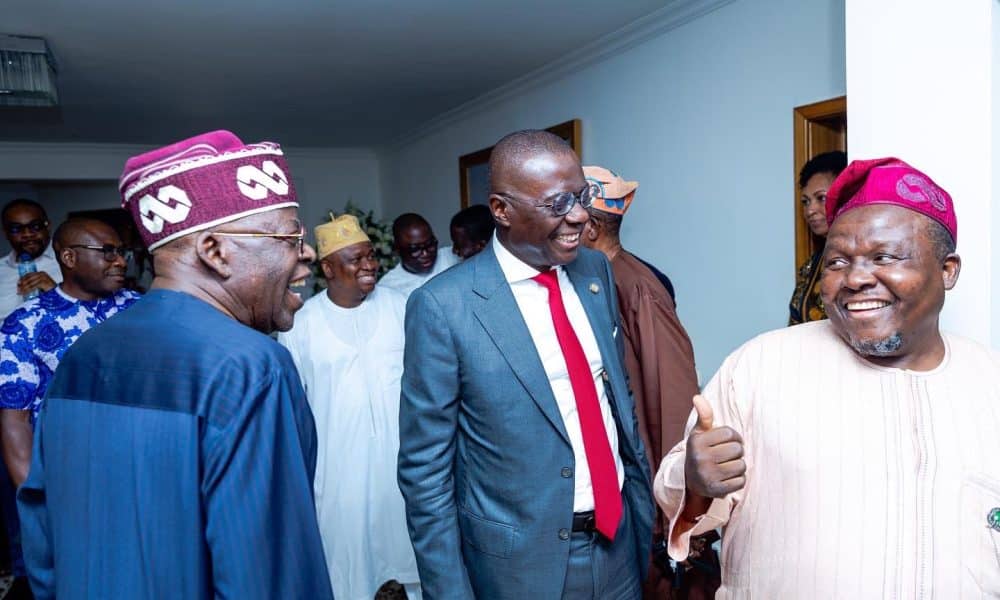 Welcome to the round-up of the latest political news in Nigeria, political gist, highlights of political events, and happenings in Nigeria for today Tuesday, 23rd August 2022.

The Governor of Rivers State, Nyesom Wike has reportedly held a meeting with the presidential candidate of the All Progressives Congress (APC), Asiwaju Bola Tinubu.

Naija News understands based on inside sources quoted on Tuesday that the two politicians met in Paris, France.

It was further gathered that loyalists of Governor Wike including Benue State Governor, Samuel Ortom, his Oyo State counterpart, Seyi Makinde and his colleague from Abia State, Okezie Ikpeazu also attended the meeting.

The sources quoted by The Cable also suggested that Wike, who is having a running battle with the Peoples Democratic Party (PDP) presidential candidate, Atiku Abubakar may reach agreements to support Tinubu and the APC in the 2023 elections.

Labour Party (LP) presidential candidate, Peter Obi has dared other party flag bearers who condemn his statistics on Nigeria to present their own argument.

Obi threw the challenge while he and the national leadership of his party received Valentine Ozigbo.

Ozigbo, a business mogul, was the Peoples Democratic Party (PDP) candidate in the 2021 Anambra governorship election.

The former governor of Anambra state accused other presidential candidates of poking holes in his theories without presenting their side of the argument.

Obi argued that data and information are important during political campaigns and in governance.

Naija News reports that the NBA annual conference was held yesterday at the Eko Hotels and Suites, Victoria Island, Lagos.

Shettima, just like other top politicians and company heads, was present at the event to represent the presidential candidate of the APC, Asiwaju Bola Ahmed Tinubu.

The former governor of Borno state was, however, mocked by Nigerians, including former presidential aide, Reno Omokri, for wearing a pair of gym shoes to the event while on a suit.

Reacting, however, Keyamo who doubles as spokesperson for the Tinubu Presidential Campaign Council, took to his verified Twitter page on Tuesday to post photos of himself dressed in a suit and joggers (similar to Shettima’s), making a mockery of critics of the APC chieftain.

Sharing the photos, the Senior Advocate of Nigeria (SAN) captioned: “Now, since they think the issues of Nigeria are three buttons, a pair of sneakers and a long tie, let’s help make them the real issues.”

The vice presidential candidate of the Labour Party (LP), Yusuf Baba-Ahmed, has described the emergence of the All Progressives Congress (APC) in 2015 as a mistake.

Baba-Ahmed on Tuesday warned Nigerians against allowing the mistake to repeat itself in the 2023 general elections.

Speaking on the security challenges in the country, the running mate of Peter Obi promised to expand the recruitment process to get the police needed.

Baba-Ahmed condemned the federal government for failing to tackle the insecurity challenges rocking the country.

He further stated that the ruling party has failed to deliver on its campaign promises.

Baba-Ahmed stated this while speaking on Channels TV on Tuesday.

After Missing NBA Conference, Tinubu, Kwankwaso, Other Presidential Candidates Set To Meet At Another Event

This is coming a few hours after Tinubu missed the annual conference of the Nigerian Bar Association (NBA) in Lagos where he was represented by his running mate, Kashim Shettima.

The organizer and promoter of the event, Mr. Ahmed Wadada during an interview on Tuesday said the candidates have been approached and have confirmed their intention to attend the event.

Apart from the presidential candidates, Naija News understands other top politicians including Vice President Yemi Osinbajo, royal fathers, traditional rulers, captains of industries, and other dignitaries are expected at the four-day event.

According to Wadada, the aim of the event is to douse the tension in the polity and ensure a peaceful 2023 elections.

Loyalists of the Labour Party (LP) presidential candidate, Peter Obi have been warned not to turn off potential supporters with violent and unruly behaviours.

The concern and warning was raised by the 2015 presidential candidate of KOWA Party, Prof Remi Sonaiya who is now a supporter of Peter Obi’s 2023 presidential ambition.

Taking to the micro-blogging site, Twitter, Sonaiya said what the ‘obidients’ as they are popularly called need to do is to be courteous and respectful.

Naija News reports she made her view known in a tweet on Monday in which she wrote: “Seriously hoping that overzealous #Obidients won’t turn off many potential supporters with their attacks and violent behaviour.

“We have a great opportunity to put a different stamp on the upcoming campaign season by being courteous & respectful.”

Nigerians however, faulted the former governor’s absence from the event that took place in his city.

Speaking on the incident via Twitter, Garba said that Tinubu has shown that he would not run a megalomaniac leadership.

He argued that Tinubu plans on running an inclusive leadership.

He explained that the APC standard bearer does not plan on burying Shettima or keep him hidden instead he plans on including him in running the country.

The meeting of a group supporting the presidential candidate of the Peoples Democratic Party (PDP), Atiku Abubakar, the National Mandate Group (NMG) was disrupted by thugs on Sunday.

The thugs had hindered the meeting of the group led by Senator Lee Maeba from holding at his facility in Bori, the headquarters of the Khana local government area of the State.

According to Leadership, members of the group had the intention of endorsing Atiku who is currently not on the same page as the Governor of Rivers State, Nyesom Wike.

Meanwhile, the Governor Wike-led government has reaffirmed its commitment to arrest and prosecute the owner of any filling station selling petroleum products supplied by artisanal refiners.

Stakeholders of the Peoples Democratic Party (PDP) are considering the Southwest to produce a possible replacement for the party’s National Chairman, Iyorchia Ayu.

A source that spoke on the crisis with The Guardian said some party leaders are pushing for a Southwest person to replace Ayu.

The source which stated that the issue is yet to be decided, however, claimed that the consensus opinion of members is that Ayu should go.

He noted that the stakeholders are considering appointing the National Vice Chairman (South), Taofeek Arapaja as national chairman or picking the former governor of Ondo State, Olusegun Mimiko, an ally of Rivers State governor, Nyesom Wike.

2023: Tinubu Holds Meeting With Party Loyalists Ahead Of Campaigns

The Presidential candidate of the All Progressives Congress (APC), Bola Tinubu, on Monday, held a meeting with his loyalists in Lagos State.

The presidential candidate is meeting with his loyalist a few weeks before the official commencement of campaigns ahead of the 2023 general elections.

Tinubu’s meeting with his loyalist could have been the reason for his absence from the general conference of the Nigerian Bar Association (NBA) in Lagos State on Monday.

Naija News reports that Musawa stated this on Monday night during an interview on Channels Television.

The APC chieftain said the party members have confidence in Adamu, including the National Executive Committee (NEC) and there is nothing that would change it.

Speaking on the upcoming meeting of NEC with the National Working Committee (NWC), Musawa said that the outcome of the meeting will have little or nothing to do with Adamu’s removal.

The National Publicity Secretary of the Social Democratic Party (SDP), Rufus Aiyenigba, has told Nigerians to ignore one Alfa Mohammed who claimed that the party might support the presidential candidate of the All Progressives Congress (APC), Asiwaju Bola Tinubu.

Naija News had earlier reported that Mohammed had said that no serious party would turn down an opportunity to have Tinubu as it’s presidential candidate, hinting that the SDP might endorsed the APC flag bearer in the nearest future.

Mohammed had said, “I would not be surprised if the largest body of the SDP decides in near future to adopt Tinubu for president and thus cause further division in the party, especially if the court fails to determine which of the SDP factions is authentic shortly.”

However, Aiyenigba, in a statement on Monday, said that Mohammed was no longer a member of SDP and urged the public to disregard his statement.

Princewill Dike, a close ally to former Minister of Transportation, Rotimi Amaechi, has pitched his tent with the Rivers State Governor, Nyesom Wike.

Naija News reports that the All Progressives Congress (APC) chieftain has dumped the party for the Peoples Democratic Party.

Princewill is a kinsman of Amaechi and both hail from the Ubima, in Ikwerre Local Government Area of the State.

According to Dike, APC is heading for destruction and he cannot afford to waste his political destiny.

The party chieftain, who was Special Assistant on Student Affairs while Amaechi was the state governor, said he had preferred solutions to solve the issues rocking the party but all his advice was not heeded.