Why I Conferred Chieftaincy Title On Portable – Monarch Speaks 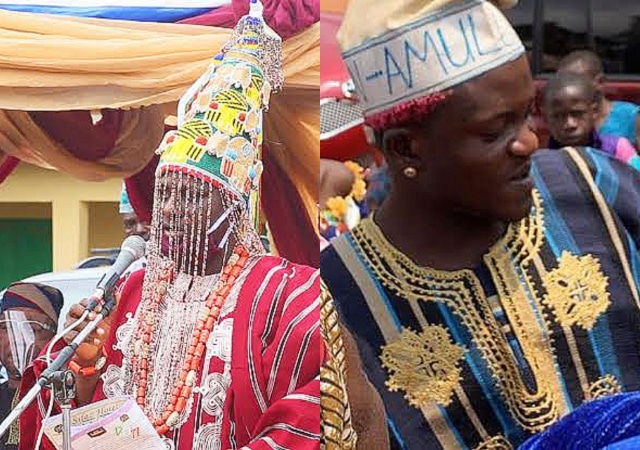 Recall that the singer had announced on Monday that he will now be known and addressed as “Chief Amuludun of Tigbo, Aworiland.”

Since the conferment of the chieftaincy title, some persons have criticised the action of the monarch.

Reacting to the backlash, the monarch explained that he decided to confer Portable with a chieftaincy title because he is respectful.

The monarch insisted that people’s account of the Zazuu crooner differed from what he saw when he met the singer.

He said: “I VISITED A SCHOOL IN MY DOMAIN WHERE I HAVE GOTTEN A REPORT OF MISBEHAVIOUR AMONG THE PUPILS AND STUDENTS OF THE SCHOOL. SO, I WENT TO THE SCHOOL TO TALK BRIEFLY WITH THEM. IT WAS THERE THAT I WAS TOLD THAT SOMEBODY CALLED PORTABLE WAS PASSING THROUGH MY DOMAIN AND WAS THROWING MONEY AT PEOPLE, AND IN THE PROCESS, MANY GOT INJURED.

“BECAUSE OF THAT, I SUMMONED HIM TO MY PALACE, AND HE CAME TWICE, BUT I WASN’T AT THE PALACE WHEN HE CAME. SO, ONE DAY, I WAS WALKING ON THE ROAD, AND I SAW HIM DRIVING; I CALLED FOR HIM, AND HE IMMEDIATELY CAME WITH HIS BOYS, AND THEY ALL PROSTRATED ON THE ROAD.

“HIS MUM IS FROM TIGBO, AND HE TOO LIVES HERE; HE PRESENTED HIMSELF AS A RESPONSIBLE PERSON, AND WE TAKE HIM AS THAT. SOME PEOPLE MIGHT HAVE RESERVATIONS ABOUT HIM, BUT EVEN AT THAT, HE IS OUR SON.”