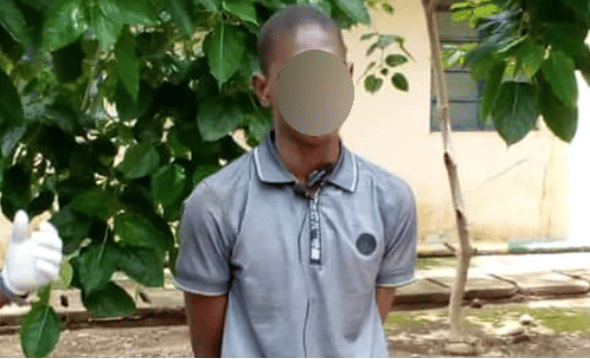 A 25-year-old man, Najib Shehu, who used a pestle to kill his stepmother, Asiya Mohammed has explained that he was trying to defend himself when the incident occurred.

According to the Katsina Police spokesman, SP Gambo Isah in a statement, the incident happened on the 18th of August in Ambassador Quarters, after which the young man was paraded at the command’s headquarters, Katsina state.

The pestle used in killing the 60- year old woman was also displayed during the parade.

Shehu who spoke in Hausa and in altering English explained, “My name is Najib Shehu. I am 25-year-old and a 200-level Education Management student at the Federal University, Dutsin-ma.

“I have been having issues with my stepmother. But on that day, Thursday, I had just observed prayers and returned to our house. My father was sitting in the sitting room. Then, my stepmother entered holding a pestle and threatening me with it.

“My mother is the first wife of my father and they are separated. I am however staying together with my father along with my stepmother at Ambassador Quarters, Katsina here. I regret my action as I did not want to commit the sin.”

“You know it is a murder case and we must investigate thoroughly. We shall arraign him in court anytime from now immediately after the completion of our investigation,” Isah said.

Family sources said the father is currently on admission at a hospital in katsina, receiving treatment.

There was no official reaction yet from the Federal University, Dutsin-ma on Shehu’s claim that he was a student of the institution.