The PUNCH: There are increasing fears in the Peoples Democratic Party that the crisis between its presidential candidate, Atiku Abubakar, and the Rivers State Governor, Nyesom Wike, may affect its chances in the 2023 presidential elections. The party leaders, who spoke to The PUNCH, in separate interviews on Wednesday, expressed concern about the growing relationship between Wike and influential members of the All Progressives Congress, describing the development as worrisome. 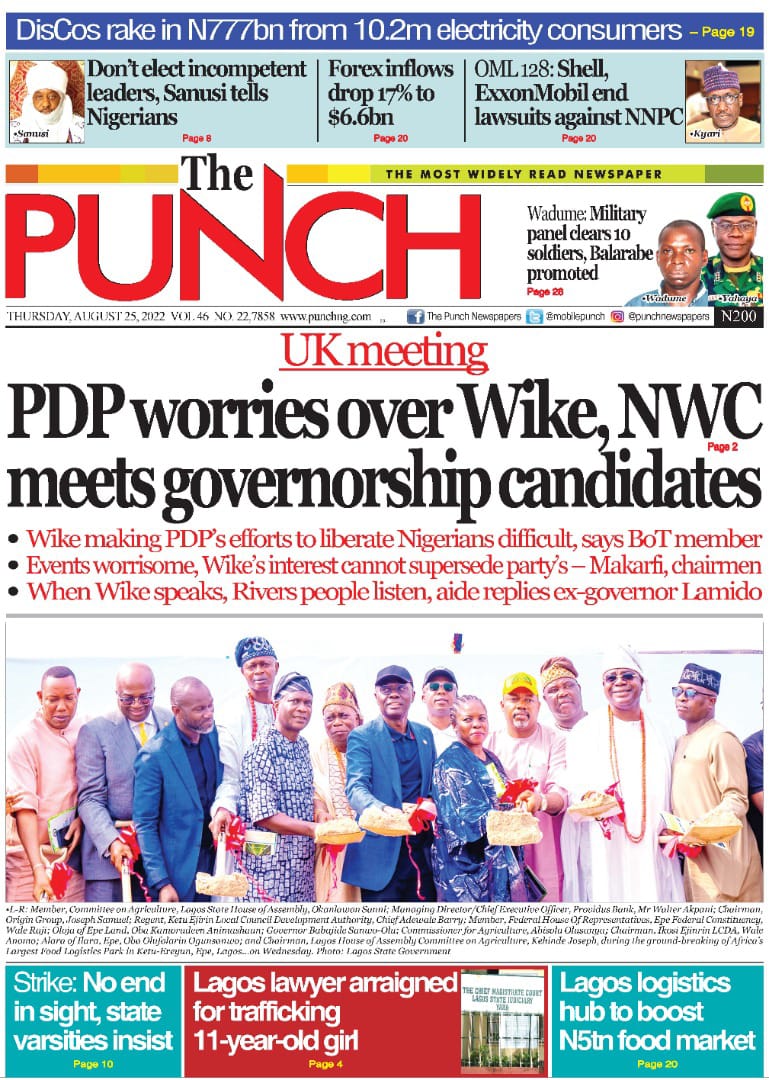 The Guardian: Despite being shut down, there are indications that the Nigerian National Petroleum Company Limited (NNPC) may have left over N136 billion as operational deficits across its three refineries in Kaduna, Port Harcourt and Warri. This is as concerns over delivery timeline and violations of local content law dog ongoing rehabilitation of the refineries. 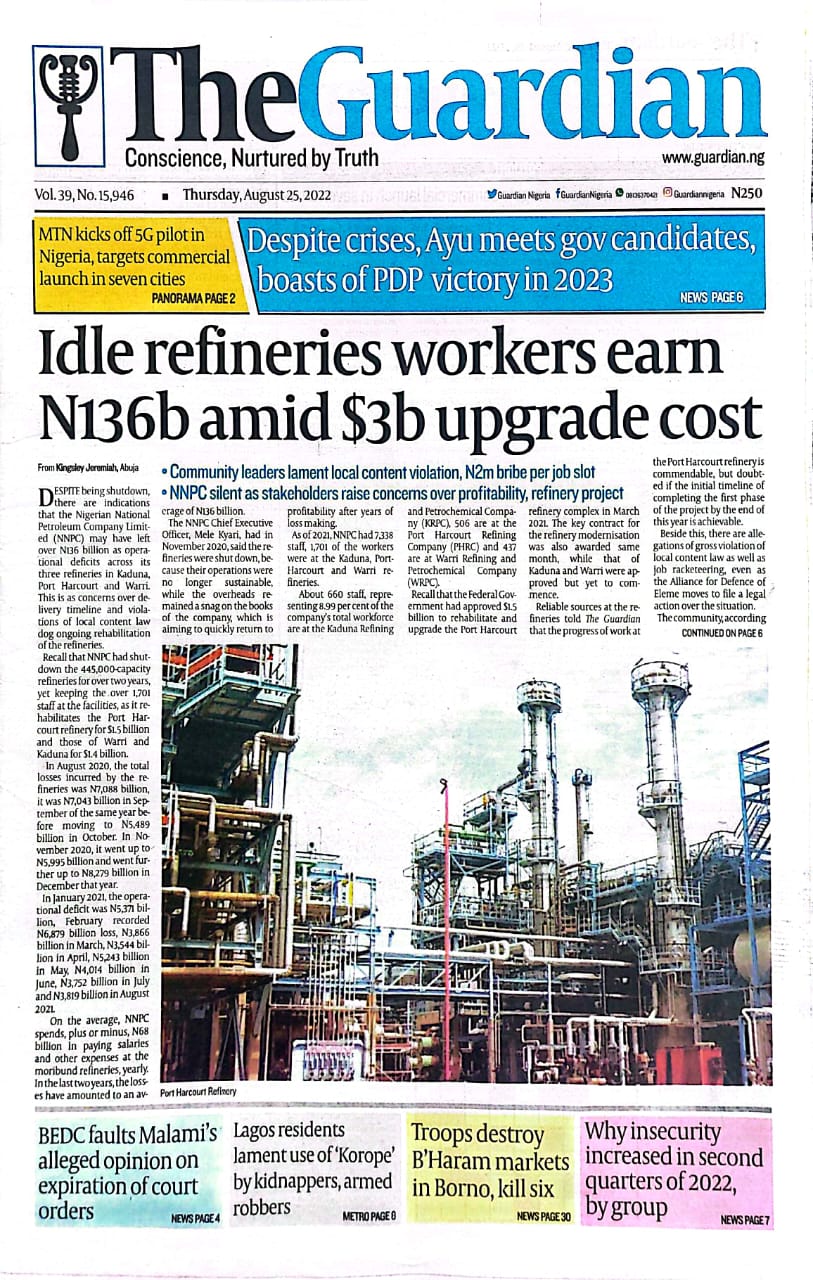 Vanguard: Alhaji Ibrahim Masari, a close associate of Tinubu and placeholder before the choice of Senator Kashim Shettima as Vice Presidential candidate of the APC yesterday, confirmed talks between presidential candidate of the All Progressives Congress, APC, Senator Bola Tinubu, and Governor Nyesom Wike of Rivers State, saying the latter has agreed to work for the success of the former in 2023. 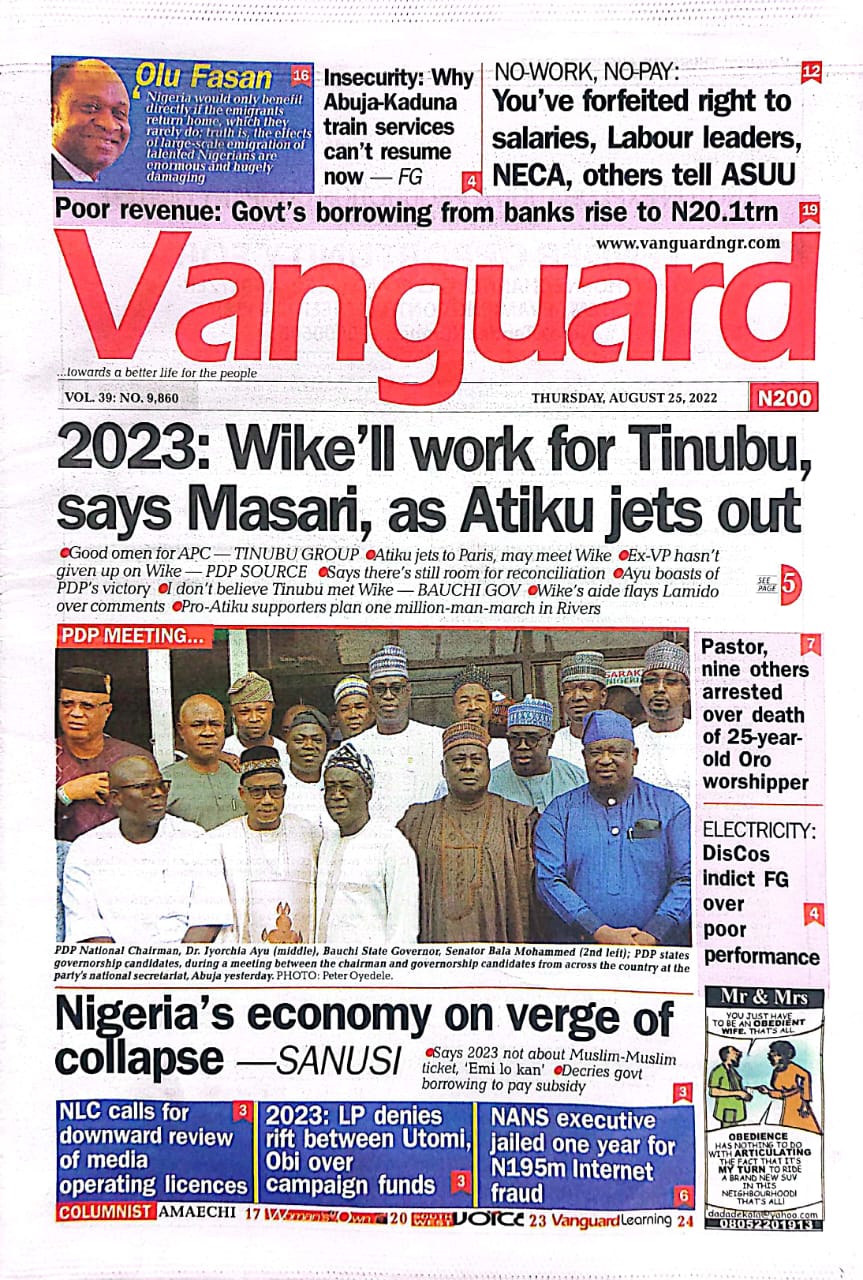 This Day: The Vice President, Prof. Yemi Osinbajo has declared that Nigeria is seeking $10 billion from international partners to fund the nation’s new Energy Transition Plan. This was just as the World Bank and the US Exim Bank have pledged to assist Nigeria in its energy renewal efforts with $3 billion. 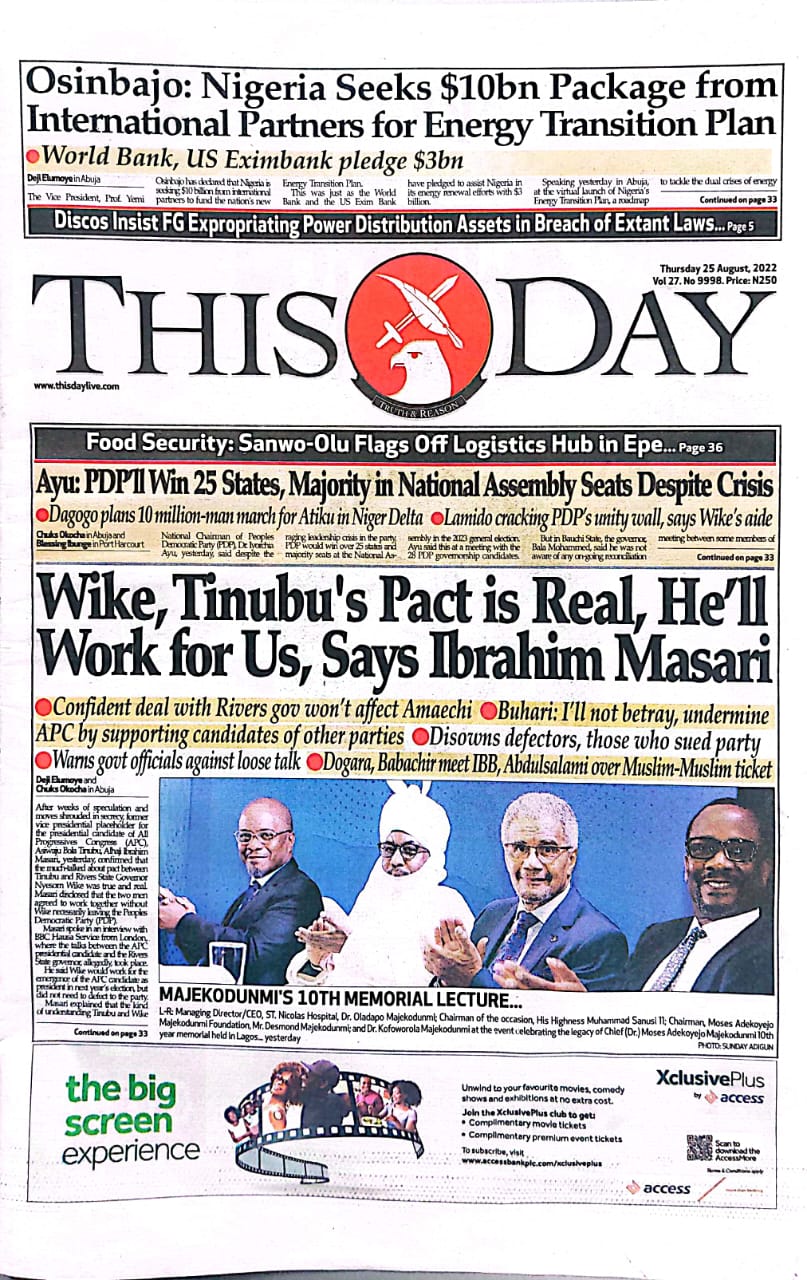 The Nation: President Muhammadu Buhari yesterday promised to work for the victory of the All Progressives Congress (APC) in next year’s general election. He reiterated his loyalty to the ruling party, stressing that he will not betray its candidates during the poll. 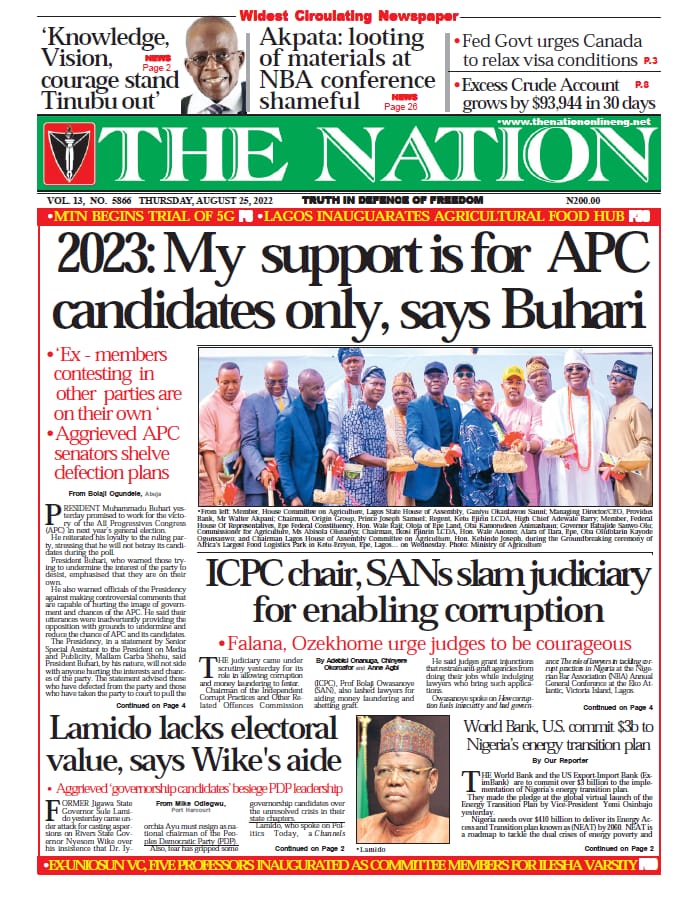 Daily Trust: Ahead of the 2023 general elections, President Muhammadu Buhari on Wednesday said he would not support candidates of other political parties against those of his party, the All Progressives Congress (APC). 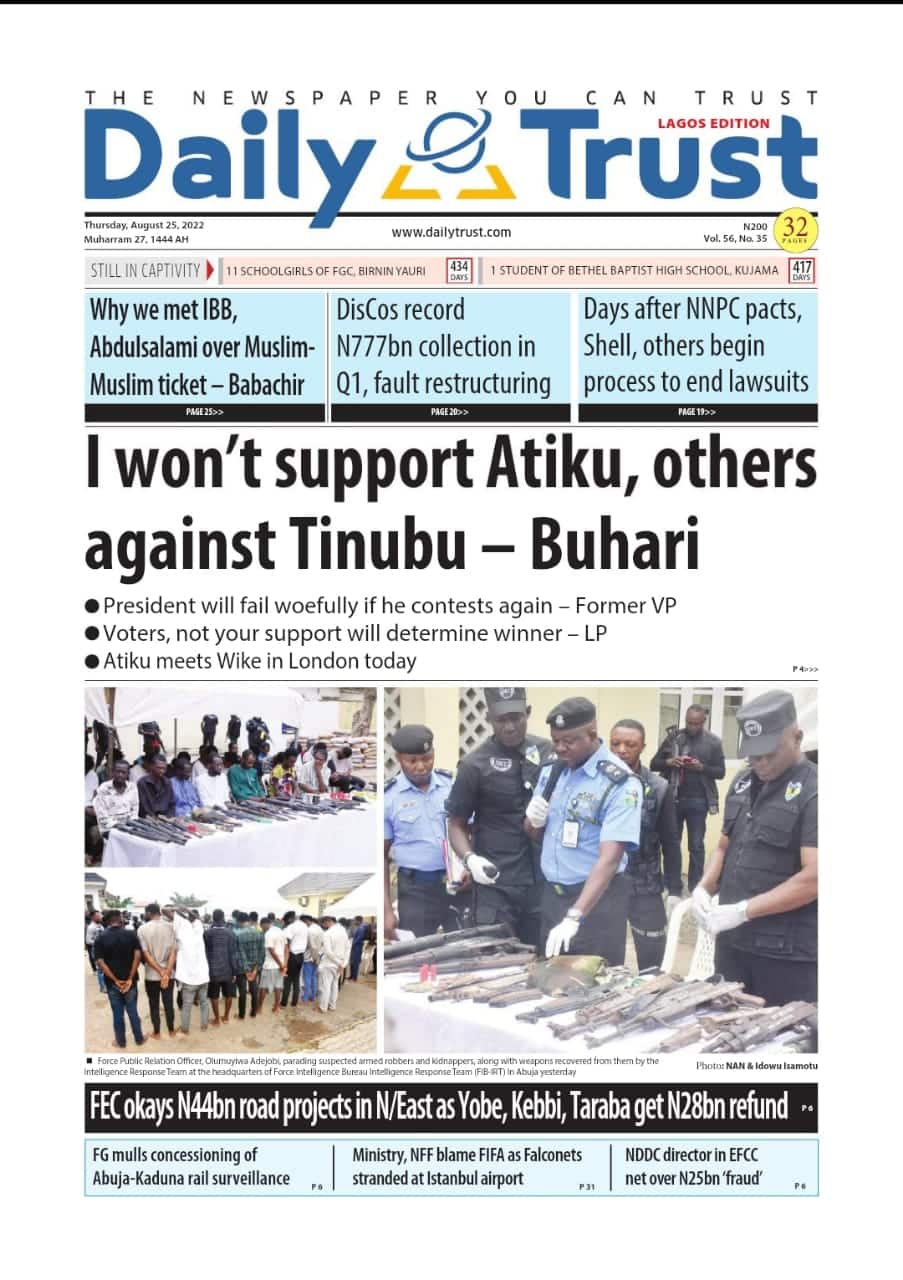