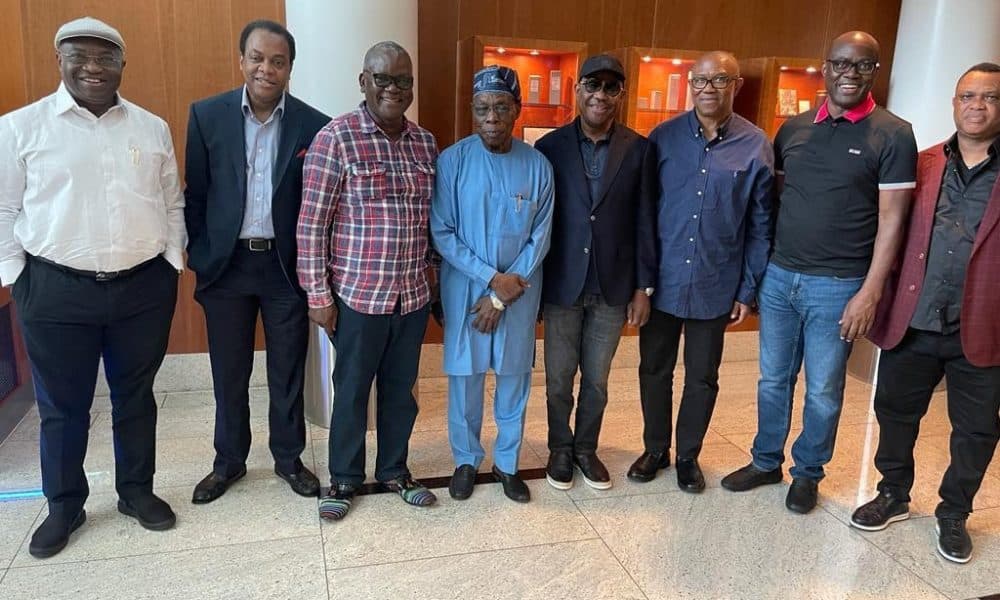 This is coming a few minutes after photos of the elder statesman and some Governors, including the Labour Party (LP) presidential candidate, Peter Obi, emerged online.

Naija News earlier reported that the meeting which was held in London had in attendance some governors elected on the platform of the Peoples Democratic Party (PDP).

However, the reasons for their meeting have not been ascertained but there are speculations that it might be connected to issues regarding the 2023 presidential elections.

Since the photos emerged online, some Nigerians have been applauding the former president, stating that he might be on a mission to join Obi in order to rescue the country.

@zobber37 wrote: “The pointer is serious approaching the South Pole ….The mission is clear, how to rescue Nigeria from Bad APC government”

@franklinosuji42 wrote: “Thank you Baba. God continue to bless you as you fight for the Nigerian youths”

@Onajite81805995 wrote: “In all this obj is doing,for one I know history will remember for all the good things this is doing for the unity,greatness of this country as a whole mõst of us don’t see it now but in years to come we will all remember it”

@nnaji33j wrote: “With Baba I know great things is cooking for Nigeria and Nigerians, baba once gave us a president we know how that president performed excellently well before his demise and this time around baba is supporting someone all Nigerians believe in, I foresee greatness ahead.”

@Ralphoguns wrote: “Yes indeed greatness will experience. Let’s just keep up with our fight for a better Nigeria”

@dearsugarman wrote: He heard Wike was meeting ipa so he flew to London to correct Wike head. Game changer!

@K31v1n0 wrote: “Baba Aremu i see you, this thing you’re cooking we can’t wait to eat. Please ride on sir.”

@Waleakintola1 wrote: “I believe this meetings must be anti emi lokan,cos anything short of that is foolishness.”