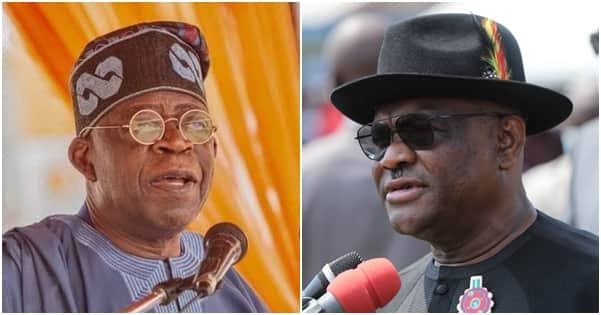 Unhappy with the crisis rocking the Peoples Democratic Party (PDP), some leaders have slammed Governor Nyesom Wike of Rivers State for reportedly meeting with the presidential candidate of the All Progressives Congress (APC), Bola Tinubu.

Recall that reports emerged on Wednesday revealing that Nyesom Wike and the APC presidential candidate met in London, UK.

Naija News had earlier reported that Wike and Tinubu met outside the country to discuss issues relating to the 2023 presidential election.

A source revealed that Lagos State governor Babajide Sanwo-Olu and his Ekiti State counterpart, Kayode Fayemi, were part of the meeting from the Tinubu camp, while Governors Samuel Ortom (Benue) and Seyi Makinde (Oyo) attended the discussion from the Wike camp.

Speaking to The PUNCH, a member of the PDP Board of Trustees and former governor of Plateau state, Fidelis Tapgun, described Wike’s meeting with Tinubu as “anti-party activity.’’

He wondered how Wike would be in the PDP and keep ‘romancing with the opposition politicians.’

While stating that the PDP owns Wike, he urged the Rivers State Governor to stop acting like he owned the party.

He added, “If not that some of us want reconciliation in the party, he should have been disciplined long ago. I expect him to know this and stop making things difficult for the PDP in its quest to liberate Nigerians from the bad governance foisted on them by the ruling All Progressives Congress.”

On his part, another BoT member, Ebenezer Babatope, said he was not comfortable with the rift between Wike and Atiku and asked them to bury the hatchet.

He stated, “I’m not comfortable with what is happening, and I am surprised that Nyesom Wike is taking the line he is taking. I don’t understand, but I do appeal to all of them, both Wike and others, to shelve their problems and allow the party to win the elections.

“They have nothing to gain by prolonging the crisis in a manner that will enable the opposition to have a strong hand. I do hope that Wike will realise that this issue is already taking a toll on the enthusiasm of the members of the PDP.

“I want to appeal to him. I heard the news that he went to attend a meeting with Bola Tinubu somewhere. That is very sad, and I hope they are not going to carry it into a kind of situation whereby there will be no solution.

He, however, expressed dissatisfaction with Atiku Abubakar’s choice of Delta State Governor, Ifeanyi Okowa, as his running mate.

He noted, “I didn’t quite support the governor of Delta State to be a running mate; I was one of those who supported Wike, and that is because I worked with him when he was a minister.

“I know him to be a very hardworking young man but to go ahead and hold a meeting with Bola Tinubu beats my imagination. If he thinks he can destroy the PDP by that, then good luck to him.”