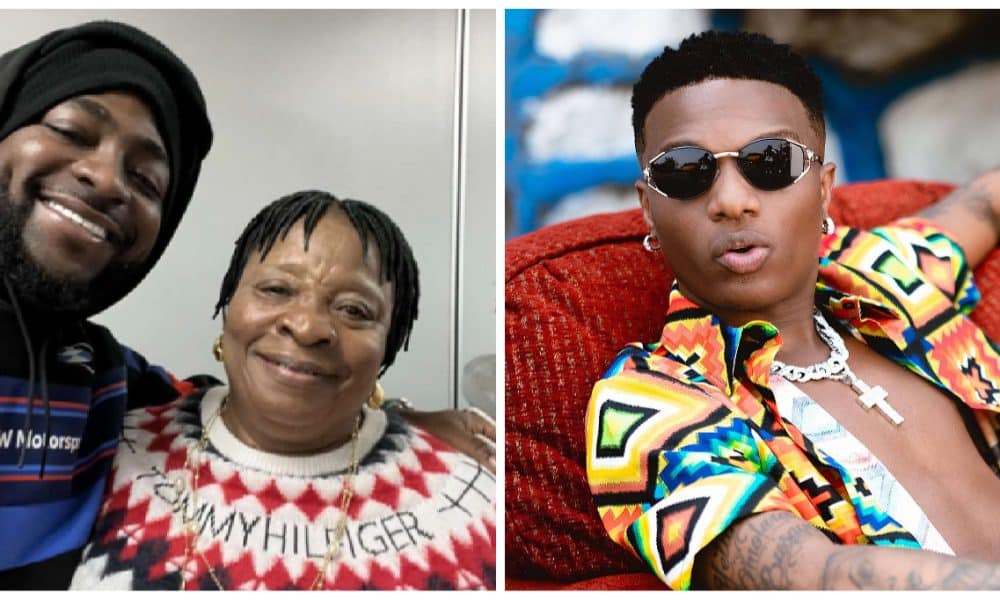 She is such an amazing woman was the first phrase from Davido’s comments on social media after meeting Wizkid’s mother.

The report among many fans is that the singer, songwriter and producer whose birth name is David Adedeji Adeleke, is at loggerheads with his home country fellow and Grammy Awards winner, Ayodeji Ibrahim Balogun (Wizkid).

Naija News understands that toxic fans of the entertainers have always bantered words on and off social media over who is better between the duo.

However, there were mixed reactions on Twitter today after Davido said he was carrying Wizkid’s mom’s bags around at the Airport earlier.

“Such an amazing Woman … God bless you ma …. D way I was carrying mommy’s bags today at the airport .. dem know say nah First class citizen,” Davido tweeted while responding to a tweet about the development.

Naija News reports that netizens have since shared their thought about Davido’s gesture.

While some expressed hope that Wizkid and Davido are on good terms, some believed the latter’s gesture was just clout chasing.

See some of their reactions below:

@Opsylo_jay – “To be honest I think David has a good heart but his only problem is that he’s so obsessed with overthrowing Wizkid. Wizkid knows this and he keeps his distance. Wizkid is the reason why we’ll probably never have a collabo between him and Davido.”

Davido30bg – “Mama don’t worry he is going to change your life for good.”

BUCHI [@_onyebuchii] – “This is so nice to see, this is actually the kind of attitude and behavior that Wizkid Should emulate, Fandome aside, many Wizkid fc’s would wish to have a fav like davido, The man has a heart of Gold, whereas the introvert wizkid thinks he is being mature.”

Kingjossyjsb [@kingjossyjsb] Replying to @blaccmajek said: “Davido with good heart. Mum will be like. Don’t fight with my boy. Davido will be like okay ma.”

BIG BANKY [@bankynoni01] “If he like make e carry wizkid mama for head we nor go do collaboration with am.”

Blessingblair [@blairvegabless1] – “It would now shock all of u the day u realise there is no beef between davido and WizKid and all the bants been for norin.”

[@iamstevemario] – “If Una like make Una no get sense,keep hating and attacking each other,davido and wizkid might be the coolest of friends and even if they are not coolest they still don’t hate each other like most of u that claim you are fanning them.”

Shading Davido, a netizen, Troy banasco [@BanascoTroy] said: “Davido would literally do anything for clout. I know he convinced mama wiz for a verse from machala.”