The PUNCH: The Peoples Democratic Party’s presidential candidate, former Vice-President Atiku Abubakar, on Thursday met with the Rivers State Governor, Nyesom Wike, in London as part of efforts to resolve the crisis with the governor. The PUNCH gathered that Atiku pleaded with Wike to support him in the 2023 presidential election 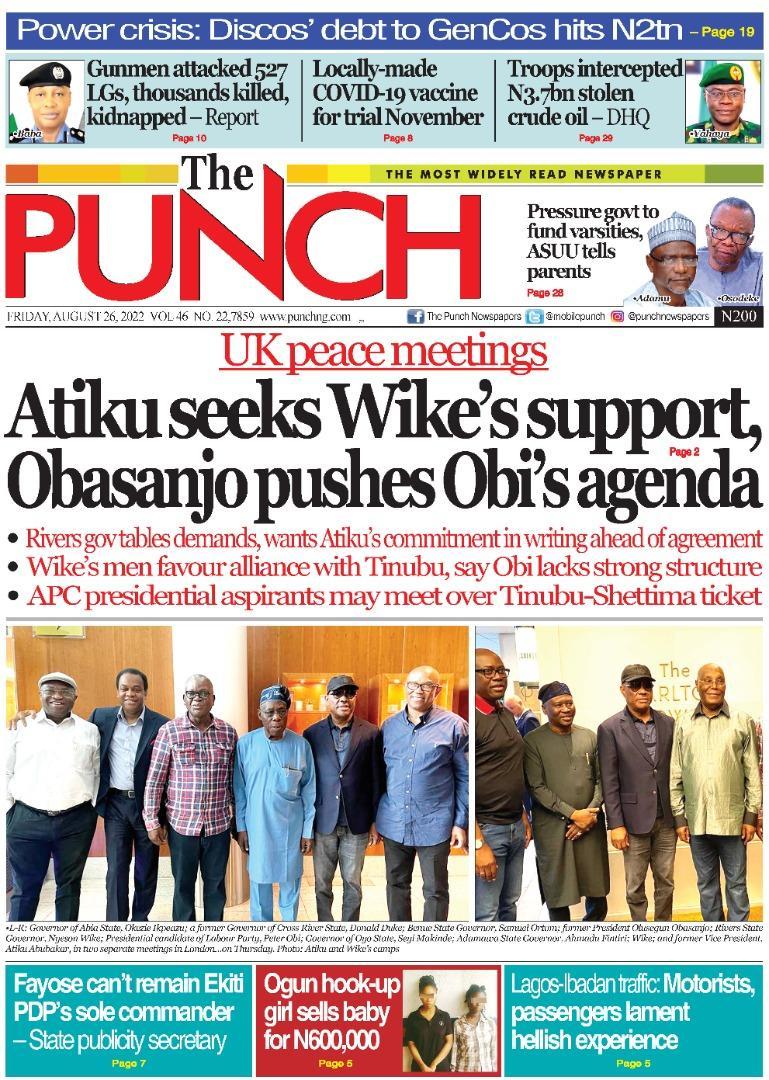 The Guardian: Exactly a week after former President Olusegun Obasanjo hosted presidential candidate of the ruling All Progressives Congress (APC), Asiwaju Bola Tinubu, in his Abeokuta home, he, yesterday, led the presidential candidate of Labour Party (LP), Peter Obi, to meet the Rivers State governor, Nyesom Wike, in London, in what political watchers believe is high-stake negotiation ahead of the 2023 presidential election. 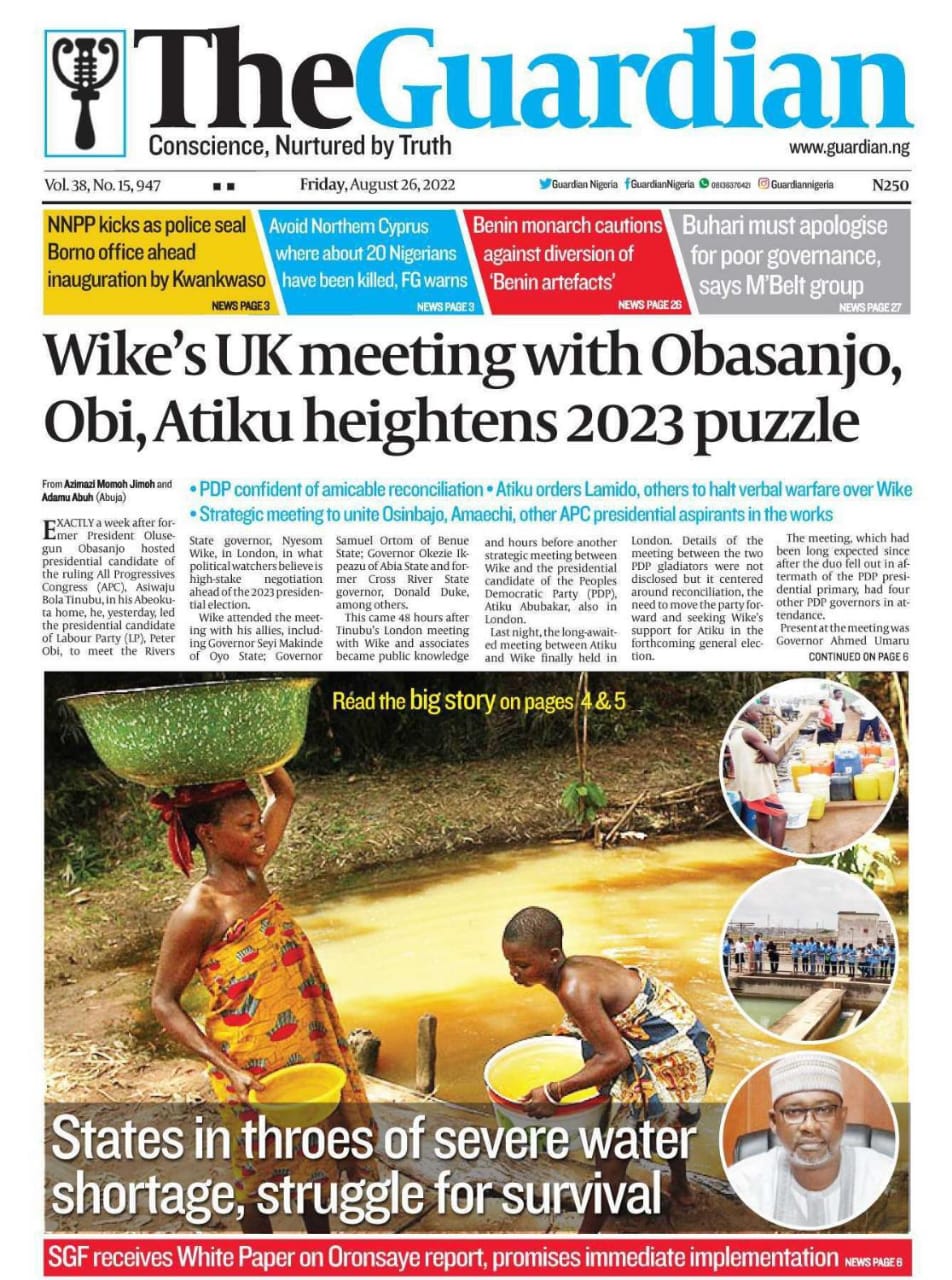 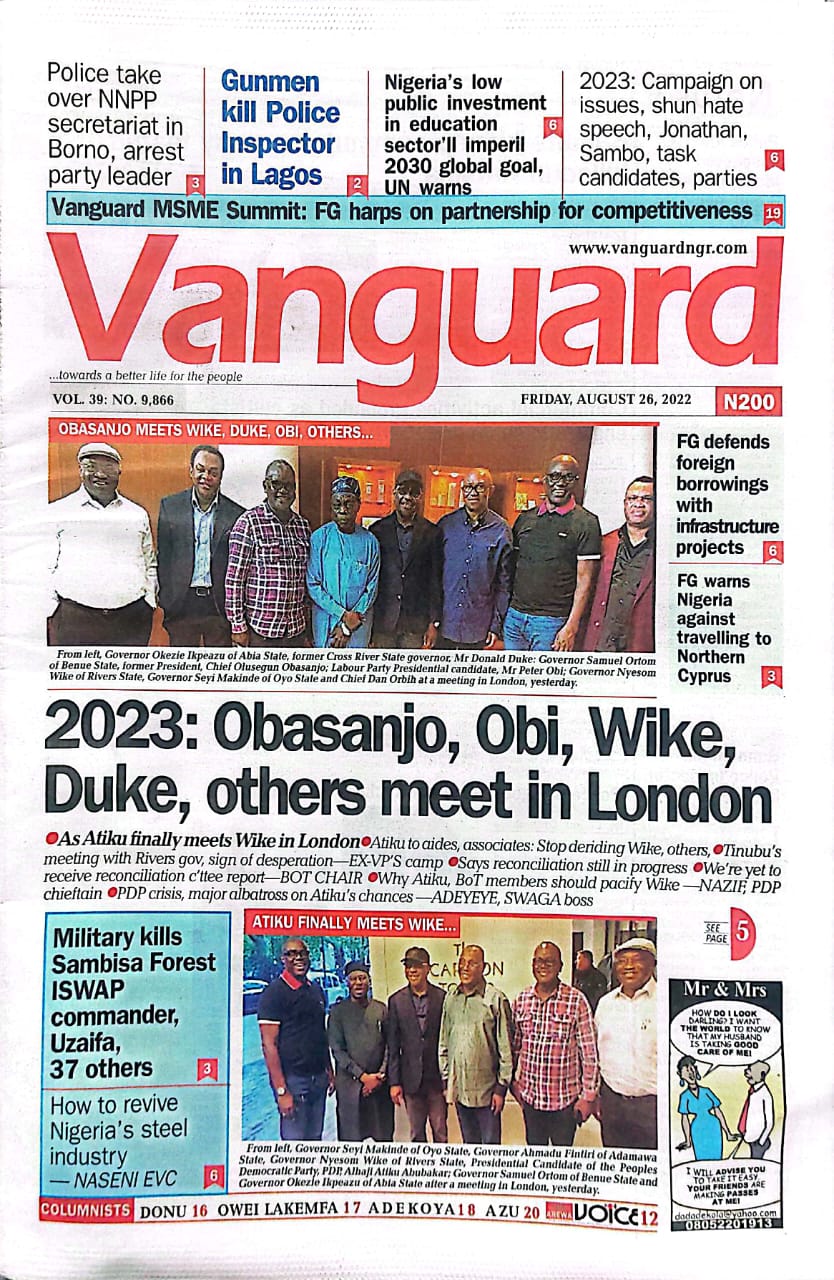 This Day: Worried by the alarming oil theft, underproduction, high production cost, among others, the Nigerian Upstream Petroleum Regulatory Commission (NUPRC) has stressed the need for the declaration of emergency on the nation’s oil and industry. The Chief Executive Officer of NUPRC, Mr. Gbenga Komolafe made the call yesterday in Lagos while delivering his keynote address at the 2022 annual international conference of the Nigerian Association of Energy Correspondents (NAEC). 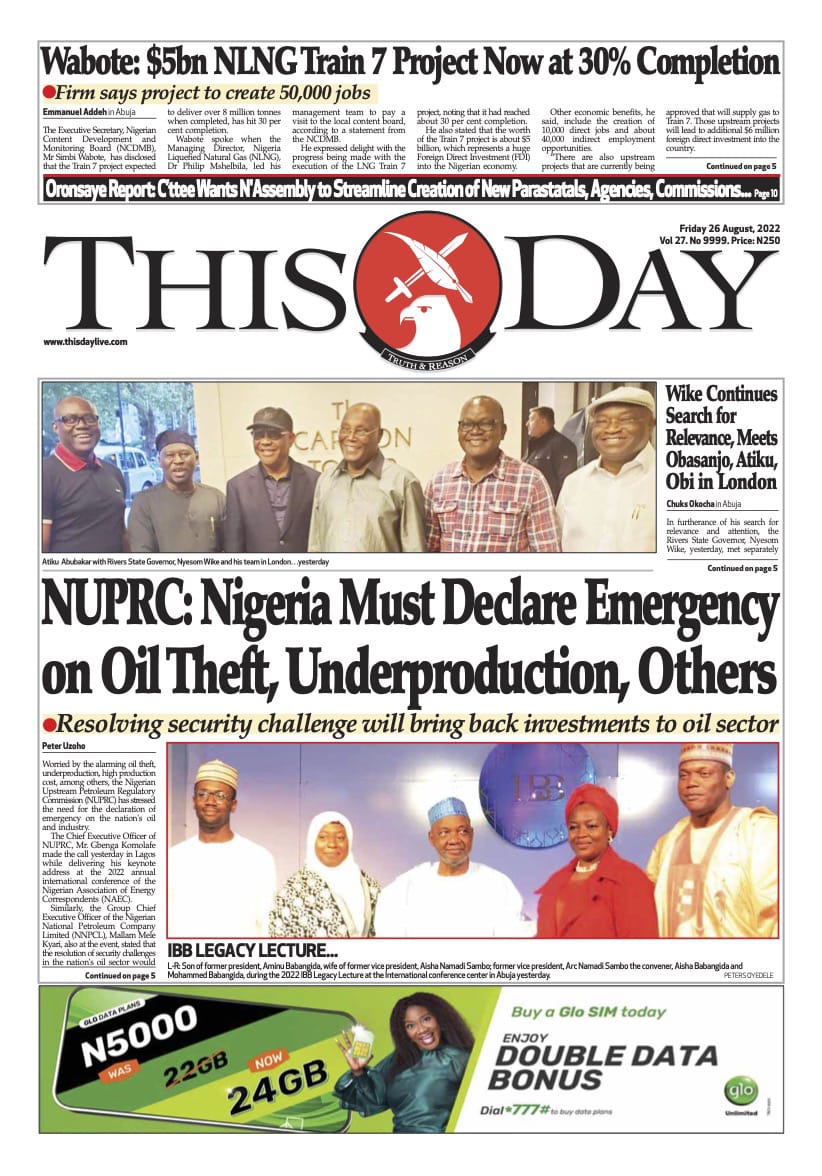 The Nation: Twenty-two former presidential aspirants of the All Progressives Congress (APC) are to unite for the party’s presidential standard bearer, Asiwaju Bola Tinubu, it was learnt yesterday. They have scheduled a meeting for next Wednesday in Abuja to strategise on how Tinubu will win the February poll next year 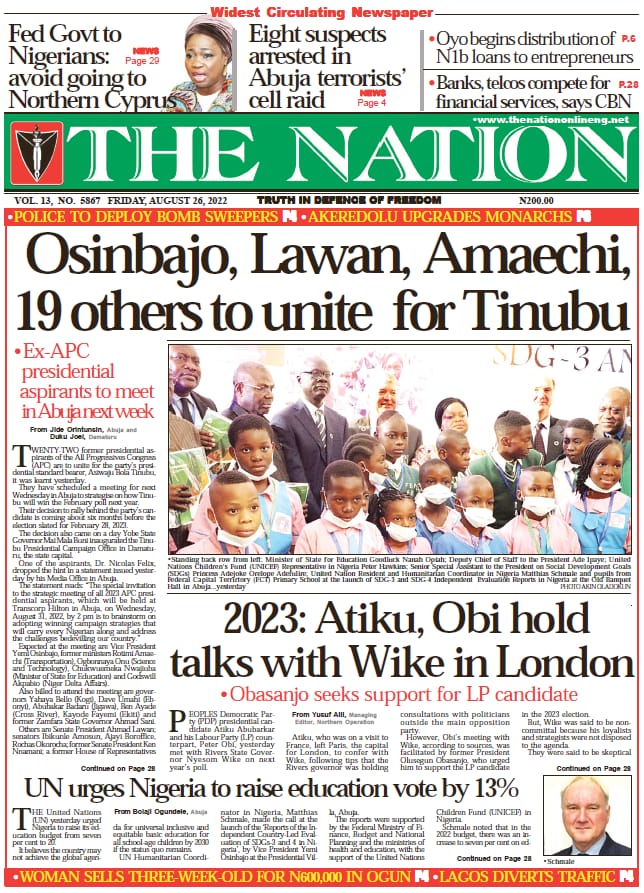 Daily Trust: Former President Goodluck Jonathan has urged candidates and other politicians alike to be mindful of the nation’s corporate existence and wellbeing of Nigerians in their campaigns and other electioneering activities for the 2023 general elections. 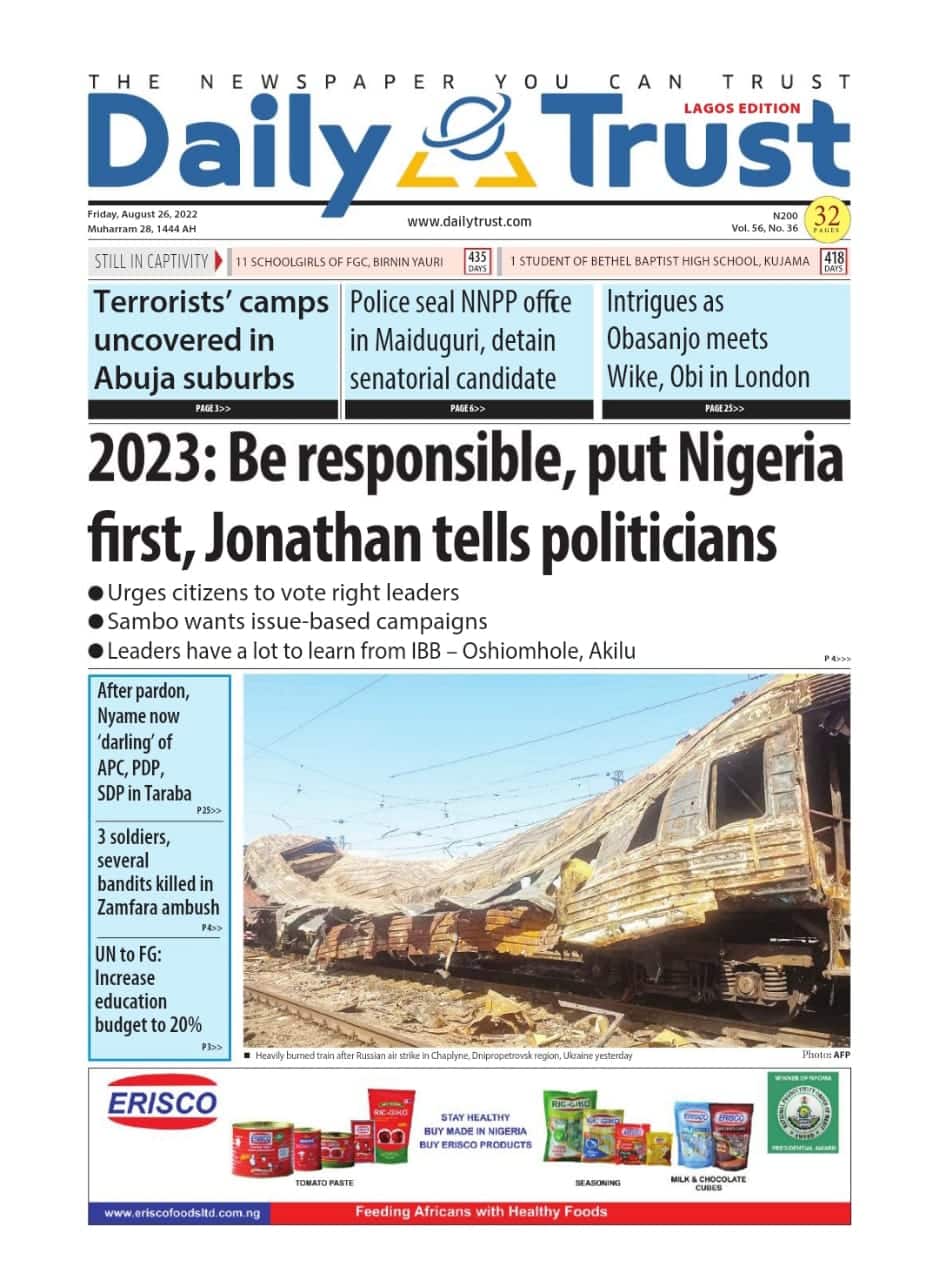