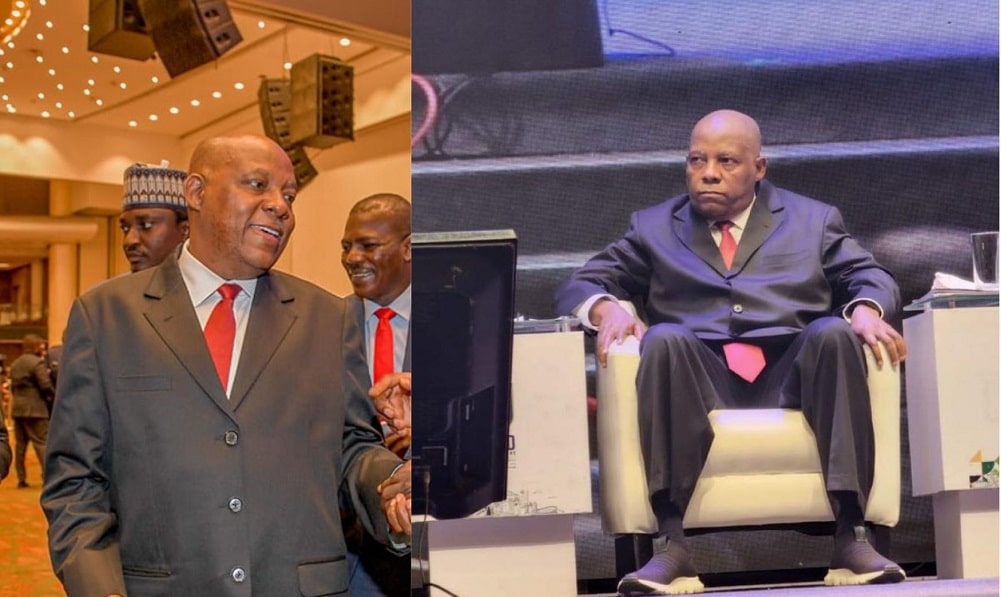 Reactions have trailed the reason given by the Vice Presidential candidate of the ruling All Progressive Congress (APC), Kashim Shettima, for the outfit he wore to the Nigerian Bar Association conference in Lagos on Monday.

Naija News understands that the outfit worn by Shettima to the NBA conference triggered a lot of reactions on and off social media.

Critics, in mockery of the APC chieftain outfit, created a trend called #ShettimaChallenge with images of several of them donning various sizes of suits with a red tie, and pairs of gym shoes across Nigerian Twitter.

However, speaking about the outfit on Thursday, Shettima said he had received word that there was a gang up against him, so he decided to throw them off with his outfit.

He noted that the outfit was deliberately worn to throw peo­ple off during the campaign.

However, some netizens have taken to the micro-blogging platform, Twitter to express their reactions to the development.

@SylvesterObigba wrote: “Keep defending yourself, ooh, I thought Keyamo said there was nothing wrong and it was a normal dress sense? Which one is deliberately again? Who do we believe?”

@ucheinspires wrote: “He deliberately wore sneakers to …? Someone interpret, please.”

@osisiokpogho wrote: “TALES BY MOONLIGHT. Akuko Mike Ejeagha, the story teller. Oga talk something else abeg. Dat one don pass.When is your boss going to Channels or Arise Tv?”

@BankyBVC wrote: “He doesn’t owe anyone explanation on this, sneakers or not, what we need is Competence. Nigerians should focus on what matters. He was very profound in his presentation at the last NBA conference.”

@lem_iv wrote: “I don’t see any reason for d explanation and you did not wear it for anybody. You wore it because it was comfortable for you and don’t come here and lie.”

@AchonyeCorneli1 wrote: “They wanted to package him as a youth but it flopped.”

@isholanomic wrote: “No justification for dressing like Stone age man in the 21st century. Go and sit down !!!!”

@gabrielakwaja wrote: “E don pepper you reach to respond. Issokay. You wore sneakers with a large suit and a lengthy tie. Issokay off d mic.”

@Xamy_game wrote: “Can someone please interpret what he said? “He deliberately wore sneakers to do what?“