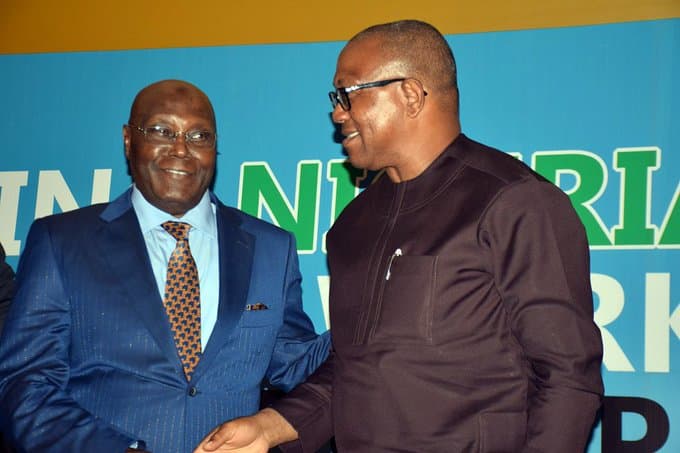 Naija News understands that reports emerged claiming that Obi had struck a deal to back the 2023 presidential ambition of the former Vice President. 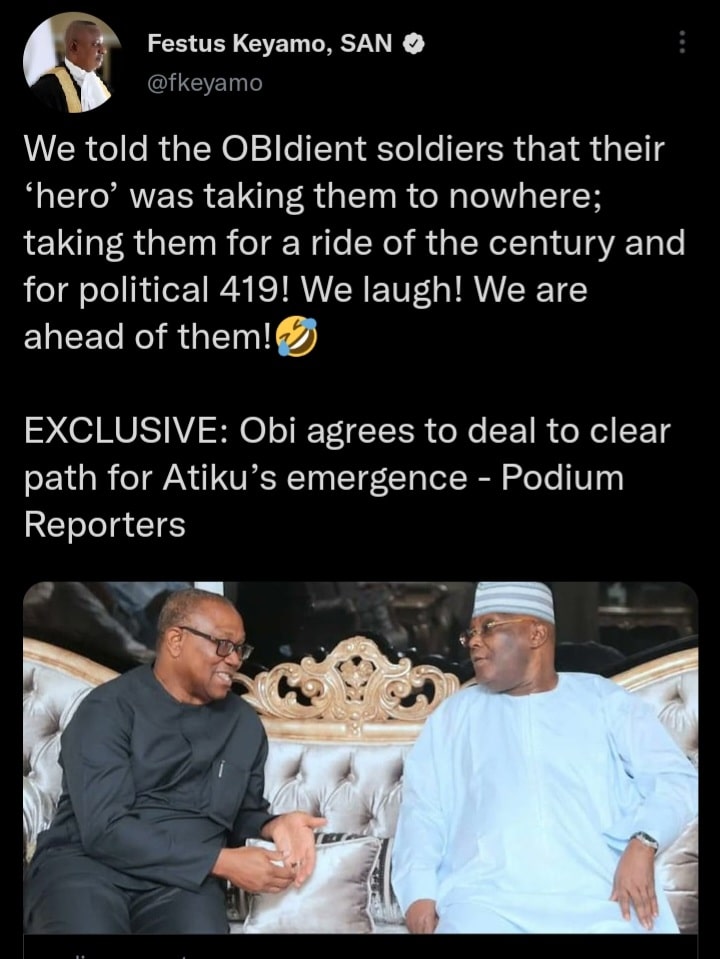 But reacting in a statement on Saturday, Peter Obi’s campaign office claimed that the speculations are the handiwork of charitable propagandists who indulge in distorting facts in the pursuit of imaginary relevance for their paymasters.

The statement read in part, “Rather than strive to contend with the hard sell of their candidates, these mischief makers bandy about misleading accounts of the issue-based messages of our candidates just to score cheap political points and thus distract the discerning public.

“While we understand the frustration of dealing in their hard-to-sell, “expired milk” [apologies to BAT] in a competitive market, the FairPlay rule demands that you don’t associate the good with the bad product. We demand honour even among thieves!

“We know the intention of the spin-doctors in selling an utterly false story that the highflying Labour Party candidate, Peter Obi, met with his PDP counterpart and reached a deal. Nothing can be further from the truth.

“Obi’s foreign trip, its motive, and where and who to meet are already in the public domain; his meeting in the UK with some Nigerian political leaders is visually seen by all.

“But mischievous propagandists prefer to concoct lies in a desperate effort to clean up their candidate.

“We understand why the focus is on the Obi-Datti candidacy; they are easily the front runners in this 2023 race and the tag team has irresistible messages that are resonating with the embattled Nigerian public who are anxious more than ever to reclaim and take back their country.

“The LP candidates are on a divine mission to rescue and rebuild this country and cannot be distracted by any fabrications intended to mislead.

“ If Obi’s mission is to rescue Nigeria from the old order, he ought not be seen working for the changing order.“

Obi-Datti media office stated that the writers had exhausted themselves even before the start of the electioneering campaign and now resort to manufacturing supporters.

It argued that the same people who said that Obi is a social media phantom wave without political structure to win an election are today struggling to ‘photoshop’ the same Obi with their candidate.

The media office equally noted that Obi’s respect for Atiku or any leader in this country has more to do with his sound upbringing and the fact that his style of politics is devoid of hate and bitterness.

It stated further, “These propagandists need to know that the movement Obi and Datti-Ahmed are driving is not something in control of one man negotiating it away.

“Nigerian people have taken the steering from Obi and are driving him to the Aso Rock Villa; they will not look sideways for distractions.

“Obi-Datti media office is privy to intelligence that many distorted stories will be dished to the public to create confusion in their minds of the public and notes that such a mission is dead on arrival because the people’s commitment to the Obidient assignment is total.”