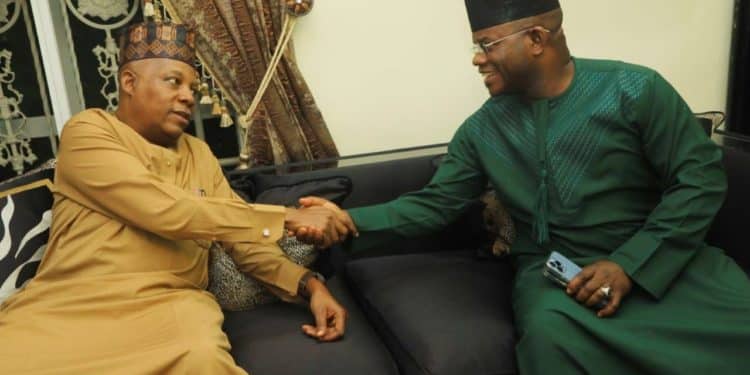 Naija News reports that this was made known in a statement signed by the Chief Press Secretary (CPS) to the Kogi State governor, Onogwu Muhammed.

He disclosed that his principal and the APC vice presidential candidate had a “brief closed-door meeting.”

According to Muhammed, the meeting “centered on various plans and strategies for winning the forthcoming presidential election for the ruling party.”

Shettima, a former governor of Borno State, is the running mate to the APC presidential candidate, Asiwaju Bola Ahmed Tinubu, in the forthcoming 2023 General Election.

Meanwhile, eight years after the abduction of teenagers from the Government Girls Secondary School in Chibok, Borno State by the Islamic terrorist group Boko Haram, the Peoples Democratic Party (PDP) said it could not dissociate Senator Kashim Shettima from the event.

Naija News recalls that Shettima was the governor when the terrorists attacked Chibok at night in April 2014 and whisked away 276 students, mostly Christian female students.

PDP on Sunday flashed back to the event in reaction to Shettima’s speech at the just-concluded National Conference of the Nigerian Bar Association (NBA), where he said Bola Ahmed Tinubu will handle Nigeria’s economy while he (Shettima) will take care of the nation’s security.

Making reference to the statement while appearing on Politics Today, a Channels Television programme on Sunday, PDP Head of Digital, Anthony Ehilebo said owing to the antecedents, Nigeria cannot let Shettima be in charge of its security.