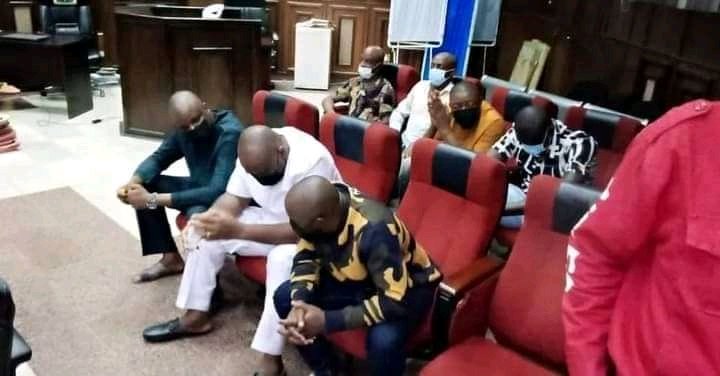 The Federal High Court sitting in Abuja has rejected the bail application filed by the suspended Deputy Commissioner of Police (DCP) Abba Kyari and three others.

Recall that Kyari had filed a fresh bail application following the terrorist attack on the Kuje Correctional Centre in July. The court had turned down a similar request in April this year.

NDLEA had alleged that Kyari and his men unlawfully tampered with 21.25kilograms worth of cocaine that they seized from two apprehended drug traffickers- Chibunna Patrick Umeibe and Emeka Alphonsus Ezenwane, accusing the DCP and his men of dealing in cocaine worth 17.55kg.

It alleged that the police officers committed the offence between January 19 and 25, 2022, at the office of Inspector-General of Police (IGP) IRT, Abuja, in connivance with one ASP John Umoru (now at large), contrary to section 14(b) of the NDLEA Act, CAP N30 Laws of the Federation of Nigeria 2004.

Kyari, who has maintained his innocence, is asking the court to grant him bail based on safety grounds.

Three other police officers in Kyari’s team who are equally on trial over the alleged offences and asking the court to grant them bail on similar grounds are ACP Sunday J. Ubia, Insp. Simon Agirigba and Insp. John Nuhu.

However, the 3rd defendant, Bawa James, an Assistant Superintendent of Police, ASP, did not join them in the application.

Delivering a judgement on Tuesday, Justice Emeka Nwite, held that Kyari’s and his other co-applicants failed to show convincing evidence to warrant that they should be granted bail.

The judge, therefore, reaffirmed his earlier ruling of March 28, 2022, ordering an accelerated hearing. He fixed October 19, 20 and 21st as the trial dates for Kyari and four others.

Judge Nwite said the suspects are to be remanded at the Kuje Correctional Centre in Abuja, pending the commencement of their trial in October.