Fayose Speaks On Tinubu As Preferred Choice for 2023 Presidential Election 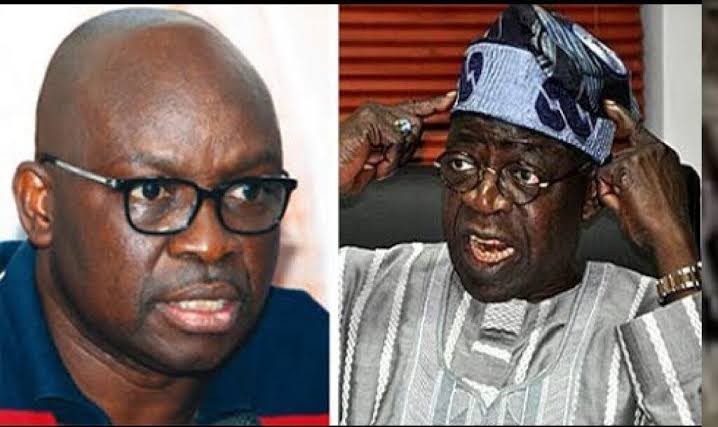 Former Governor of Ekiti State, Ayo Fayose has denied reports alleging that he has pledged his allegiance to the ruling All Progressives Congress (APC) presidential candidate Bola Ahmed Tinubu.

A viral online report had earlier alleged that Fayose, a chieftain of the Peoples Democratic Party (PDP) had said that he had no issues with Atiku Abubakar, the PDP presidential candidate and Peter Obi of the Labour Party (LP) but his choice in 2023 is Tinubu.

“I have nothing against Atiku, Peter Obi is not my enemy but JAGABAN is my choice,” Fayose was alleged to have said.

However according to Daily Post, the media aide of Fayose, Lere Olayinka has said that the report is false.

He said: “It is not true. He never said anything like that. Disregard the fake news.”

Former Minister of Aviation, Femi Fani-Kayode, has mocked the defection of former Governor of Kano State, Ibrahim Shekarau, back to the opposition Peoples Democratic Party (PDP).

Naija News reports that PDP’s presidential candidate, Atiku Abubakar, on Monday received Shekarau back to the umbrella camp in Kano.

Shekarau has since asked his loyal supporters to ensure the Waziri of Adamawa emerges victorious in the 2023 election.

Reacting however to Shekarau’s defection, Fani-Kayode took to the microblogging platform, Twitter to mock PDP, indirectly declaring them losers ahead of the 2023 polls.

The All Progressives Congress (APC) chieftain said the opposition should start preparing their acceptance speech, boasting that the party’s presidential candidate, Bola Tinubu and his running mate, Kashim Shettima are cruising home with victory come February 2023.

Fani-Kayode tweeted: “As PDP is celebrating the defection of Abubakar Shekau (Oops! Sorry, I meant Ibrahim Shekarau) into their party in Kano yesterday, Nyesome Wike flogged them mercilessly & gave them a death blow in PH by saying they wanted to come back “to loot” & “eat the remaining one.

“The mighty triumvirate of Wike, Ugwuanyi & Makinde, (representing SS, SE & SW) is the backbone of PDP. Without them PDP is NOTHING! With Wike’s damning speech BAT, our much-loved “City Boy” & Kashim Shettima, the “Golden Boy” of Nig. politics are cruising home to victory.

“They should start preparing their acceptance and swearing-in speeches today. Victoria Ascertania! Glory be to God”.