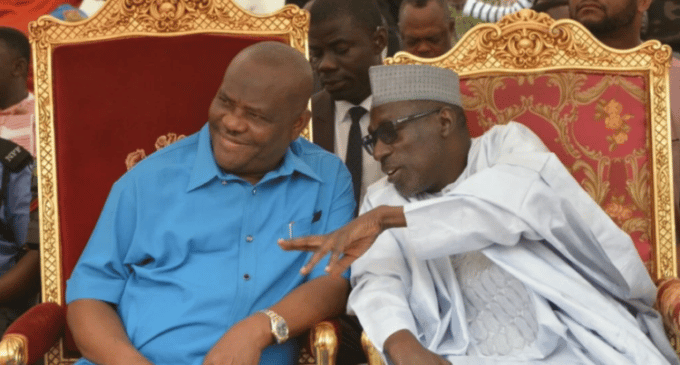 Governor Nyesom Wike of Rivers State has knocked the former governor of Kaduna, Ahmed Makarfi, over his recent interview.

Naija News reports that Senator Makarfi in an interview on Channels Television on Tuesday morning claimed that he is a close friend of Wike, adding that he has a lot of respect for the Rivers governor.

In a swift reaction, Governor Wike denied being a close associate of the former Peoples Democratic Party (PDP) National Chairman, stating that Makarfi should stop talking about him.

He said this on Tuesday during the inauguration of the sand-filled area and estate layout in Ogbum-Nu-Abali, Port Harcourt done by Governor Ífeanyi Ugwuanyi of Enugu.

Governor Wike stated that he has not spoken with the former Kaduna governor in months, asking him to ensure that the party wins his state in the 2023 elections.

He said: “This morning, I was watching Channels, I saw the former national acting chairman of the party, PDP, Makarfi, and he said he is very close to me. I don’t know how close he is to me.

“Somebody who is close to me, I don’t know when last we spoke. I have never spoken to him for the past five months. So, if you’re close to somebody politically, there is no way in five months you won’t have spoken to the person is it not?

“He said, Wike, you’re sabotaging other people. I don’t know who says the other people have not. What I want to advise Makarfi is, look, you have a job, make sure PDP wins in Kaduna State. That is your job, leave Wike alone.

“Take it upon yourself that Kaduna falls to PDP. I don’t want to hear excuses that they rigged election or they didn’t rig election. That is what I’ve told everybody. In Kano, make sure PDP wins. In Niger, make PDP wins, in Jigawa, make sure PDP wins. If you win, then see whether PDP wins here or not. Its operation delivers your state. Don’t use anybody’s state to add up.”

Speaking further, Wike said he is collapsing the structures of the ruling All Progressives Congress (APC) in Rivers and providing dividends of democracy to the people of the state.

He said: “Wike and his team are busy here bringing down all structures of APC, providing dividends of democracy. In your own state, you are only talking about Wike.”

Wike also asked Rivers politicians to return home and deliver votes for the party in the forthcoming general elections.