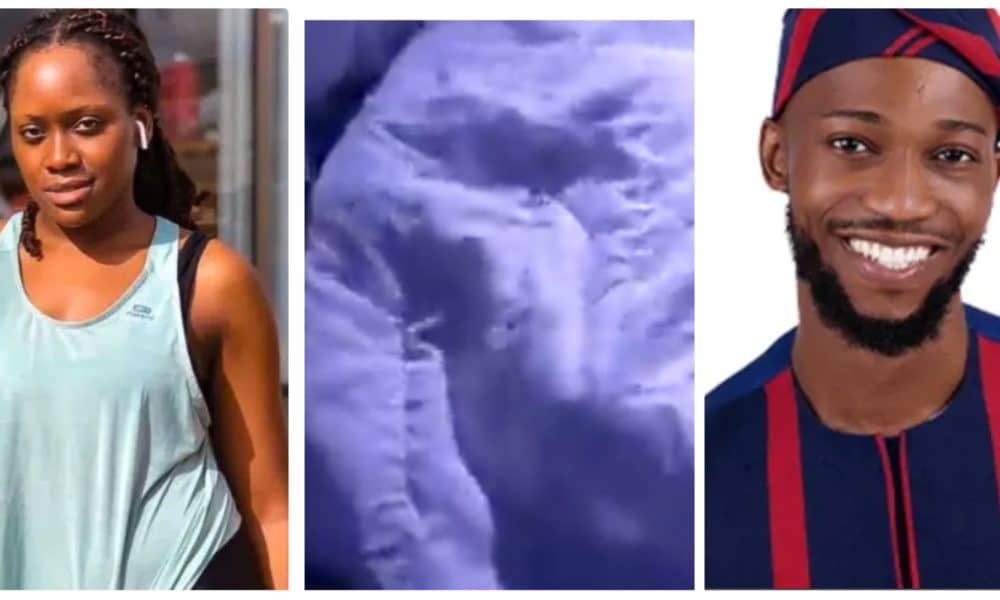 Big Brother Naija Season 7 housemate, Daniella has got fans talking on social media after an intimate video of her and Dotun emerged.

Naija News earlier reported that in the viral video, the ‘Level Up’ Housemates are believed to have gotten intimate, kissing and cuddling aggressively under the duvet.

Recall that Dotun won the Head of House challenge on Monday and chose Daniella as his deputy.

With Daniella being the deputy, both housemates have the advantage of sharing the executive HOH lounge and are immune to possible eviction.

Reacting, some fans of the show berated Daniella for moving on quickly with Dotun, barely two weeks after Khalid’s eviction while others claimed that ladies like the reality TV star cannot be trusted.

@trinidadfinist wrote: “Daniella is a beautiful babe and all but you can not travel and leave her behind as your girlfriend. She go carry another man’s child enter your house.”

@SirRomanSavage1 wrote: “Y’all dragged Khalid and swore that he’s the problem. Y’all wanted him out cause y’all wanted Daniella to focus and be alone. Well my guy is out here na showcasing his talent while Daniella is still in there doing the stuff y’all hate with Dotun”

@ZeekiHodl wrote: “Daniella is the reason you shouldn’t kill yourself because of woman, she will still sleep with another man if you d!e coz of her.”

@TheKokoCity wrote: “Daniella- Phyna is wrong to date Groovy even though he broke up with Beauty. Same Daniella- Kissing and smooching Dotun while still in a relationship with Khalid”

@Asanwa72096848 wrote: “More like ! Daniella that is bashing groovy for moving on after beauty ended their relationship, is now falling for dotun when she knows she is still with Khalid”

@Iam_jennybabes wrote: “Justice for khalid! Yes we will drag Daniella because she owed loyalty to khalid. Their relationship was clearly defined. Man went on all media rounds saying that’s his GF! Even campaigned n bragged about her but dotun isn’t even friends with khalid n owes him no loyalty”

@reresounds wrote: “Daniella judged Phyna for caring for a guy who was abused by his partner. Omg Phyna suffered on this street. The name calling ahh!! Khalid who has his gf back doesn’t deserve this. A big shame on all of you who insulted Phyna and Groovy.”

I Do Not Assign Project I Can’t Fund – Wike