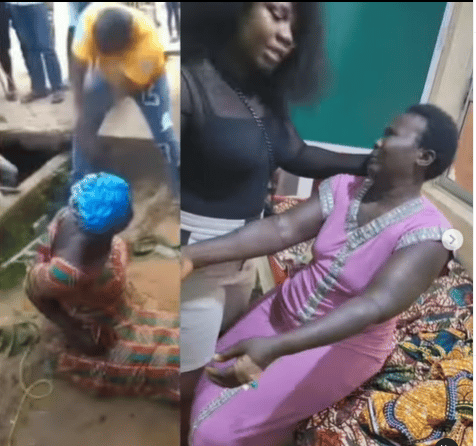 The daughter of the widow, Amarachi who was bound for two days and flogged by youths in her community, Flourish Victor has spoken out for the first time on her Facebook page.

Naija News reports that popular activist, Harrison Gwamnishu earlier in the week shared a horrifying video of a widow being tied and flogged by members of her community, Umueghu in Amaegbuato autonomous community Nkpa Bende Local Government, Abia state.

According to Harrison, the widow was assaulted after her late husband’s brother’s wife accused her of being a witch.

He added that while the woman was begging and claiming she was innocent, the community members still tied her legs, flogged and filmed her.

He wrote: “When I talk about widows protection, I’m not asking for too much. Our mothers suffer the most from child delivery.

“Mrs Amarachi Okechi, a widow was accused of witchcraft by her late husband’s brother’s wife.

“If you are from Umueghu in Amaegbuato autonomous community Nkpa Bende Local Government, Abia state, your community did this to this woman.

“Even when the woman was begging and telling them she’s innocent, they tied her hand to her back, tied her two legs, flogged and filmed her.”

The video sparked outrage which led the wife of the Abia State Governor to rescue and take to the widow to a hospital for treatment.

However, days after the incident, the daughter of the widow took to Facebook to react to her mother’s public humiliation and assault.

Flourish Victor explained that she had to leave Lagos for Umuahia when she heard what had been done to her mother.

She said, she couldn’t recognize her mother when she saw her after the assault and it broke her heart.