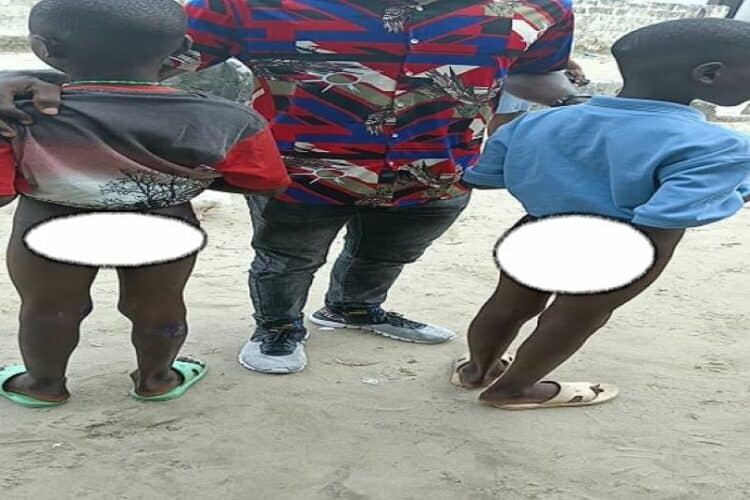 The man identified as Emeka Richard allegedly used a hot knife to burn the buttocks of the boys for playing outside.

It was gathered that the children lost their mother last October.

A human rights activist, Comrade Israel Joe, said he had to ask neighbours to rescue the children from the father after a Facebook follower informed him of the unfortunate incident that fateful night.

He also revealed that the State Ministry of Women Affairs had been contacted to take charge of the children, whose rights, he stressed, “must be protected”.

The Nation reported that the state police spokesman, DSP Bright Edafe, who confirmed the incident in a text message, said the suspect was arrested for assault bothering on “grievous harm”.

One Peter Orji has reportedly killed his elder brother, Godwin Orji for allegedly disconnecting his power over non-payment of electricity bill.

The suspect, a native of Uruagu in Nnewi North Local Government Area of Anambra State had shot his brother following a heated argument that ensued between the two brothers over the disconnection.

The argument, according to the Daily Trust, ensued after Godwin disconnected Peter’s electricity for failing to pay his monthly bill of ₦1,500.

This reportedly made him angry, thereby confronting his elder brother, who lived in the same compound with him.

A source said, “The quarrel degenerated to the point that the defaulter, Peter, got angry, rushed into his room, grabbed his gun and shot his elder brother, Godwin.

“Peter, after committing the act, ran to a nearest police station and surrendered himself, for fear of being mobbed.

“Prior to the recent issue, there had been a feud between Peter and his elder brother over a parcel of land.”

Confirming the incident, the Police Public Relations Officer in the state, DSP Ikenga Tochukwu, stated that the suspect had been arrested.

He said, “The wife of the suspect was first arrested at the scene of the crime, after which the suspect himself was arrested; both of whom are currently in police custody.”