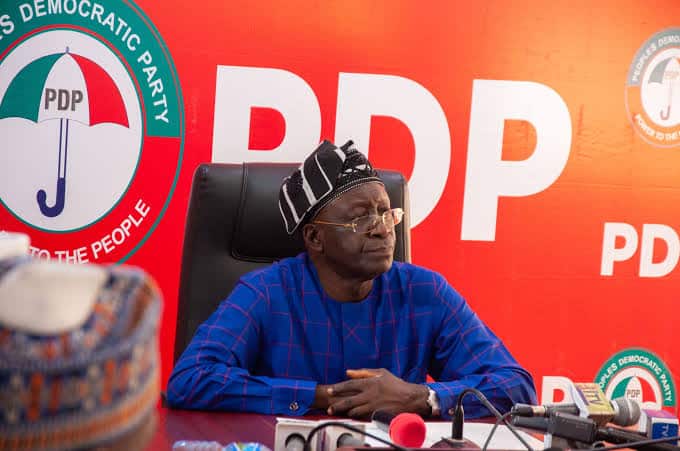 The National Chairman of the Peoples Democratic Party (PDP), Senator Iyorchia Ayu, has stated that he won’t resign from his position, stressing that he is not bothered by the calls for his resignation.

Naija News reports that the camp of the Rivers State Governor, Nyesom Wike, has allegedly been calling for the resignation of Ayu as a condition for peace and to support the presidential candidate of the PDP, Atiku Abubakar.

In an interview with BBC Hausa, Ayu described those plotting his removal as party chairman as children.

He said he was elected based on the laid down rules of the main opposition party, adding that if there would be another election, those calling for his resignation would not be replacing him.

Ayu said: “I was elected to lead the PDP for a four-year term, I have not even spent one year. The election of Atiku as a presidential candidate has nothing to do with the position of national chairman. I won an election as prescribed by our party’s constitution.

“I did not commit any crime, I’m only bringing in positive reforms to the party, and honestly, I’m not bothered by the noise

“I know I’m working, I have not stolen any money, I have not committed any offence because of this. I don’t know what all that talk is about.”

Asked whether or not the yet-to-be resolved dispute with Governor Wike will affect the party in 2023, Ayu said: “We founded the PDP in Nigeria. So, some children/kids, who have no inkling about the struggle, cannot become a problem.

“When we started the PDP, we did not see these children/kids, they didn’t know why we founded this party. We will not allow an individual to come and destroy our party.”