Knocks As FFK Hails Shettima At 56 – A Man He Once Called Boko Haram Boss, Murderer

Felicitating the Maiduguri-born politician and Vice Presidential candidate of the All Progressives Congress (APC), FFK said Shettima has inspired millions of patriots all over Nigeria with his exemplary qualities.

He referenced Shettima as his friend and brother, praying to God to permit the celebrant with more years in good health and prosperity.

Fani-Kayode tweeted: “Happy birthday to Sen. Kashim Shettima, former Gov. of Borno state & a humble, profound, brilliant, courageous, patriotic, loyal & inspiring son of Nigeria who destiny has called to greatness, who is a true friend & brother & who will be elected VP of our country next year.

“You inspire millions of patriots all over Nigeria by your exemplary qualities, dedication to duty, strength, fortitude and vision. May God strengthen, prepare & protect you for the great task that lies ahead & may He grant you many more years of good health, peace, joy, blessings, prosperity and service to our great nation.

“Have a great day brother.”

FFK’s birthday message and wishes to Shettima have, however, generated reactions on social media as some netizens knock the APC chieftain, labelling him as a double-mouthed politician.

It could be recalled that FFK made a demeaning comment about Shettima via his verified Twitter page at exactly 10:13 AM on December 14, 2017.

The tweet reads: “In Maiduguri, the citizens know that Governor Shettima is the Boko Haram boss and the keeper of Chibok girls.

“Shettima is indeed the keeper of the Chibok girls whilst Ali Modu Sherrif himself is the founder and father of Boko Haram.

“Both men are murderous, evil scum.”

Naija News understands that netizens recalling the previous statement,  now use it to attack the politician on social media whenever he makes a positive commendation of Shettima in an attempt to promote his candidacy alongside APC presidential flagbearer, Bola Tinubu.

See some of the knocks on FFK below as he celebrates Shettima on his 56th birthday. 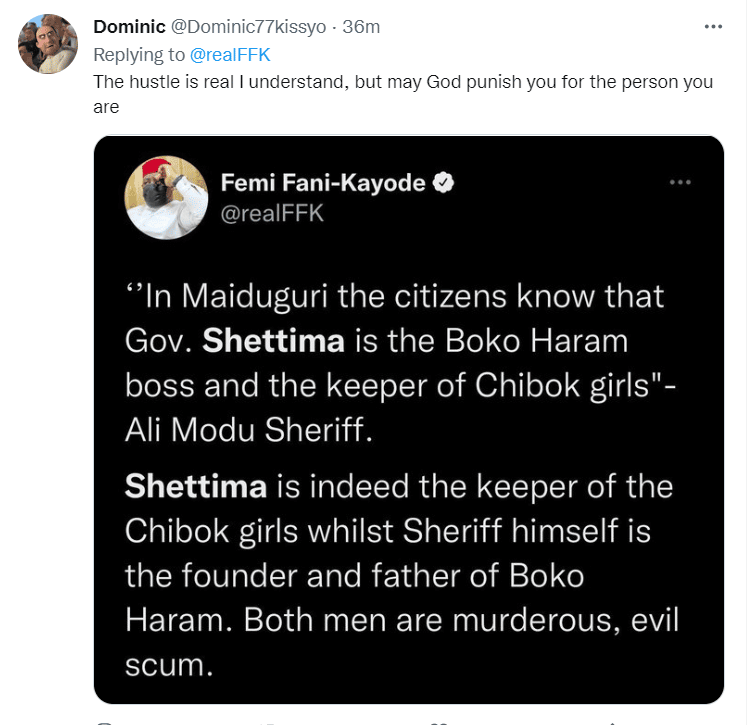 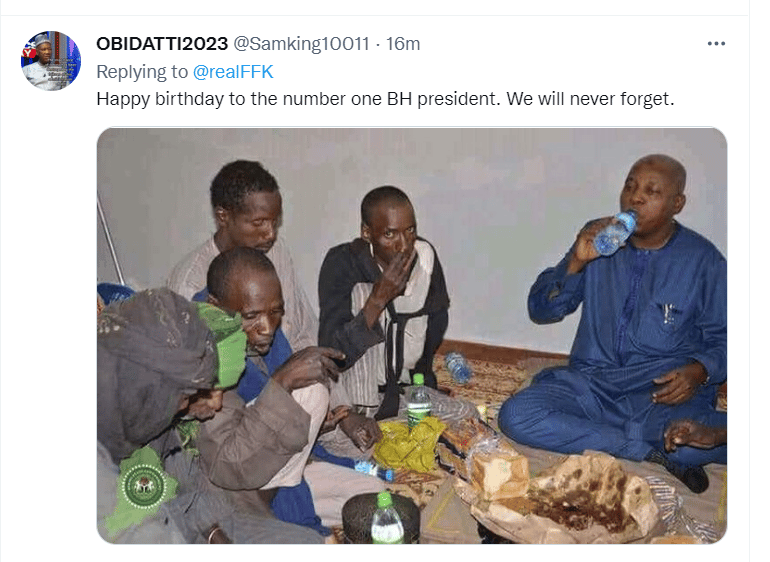 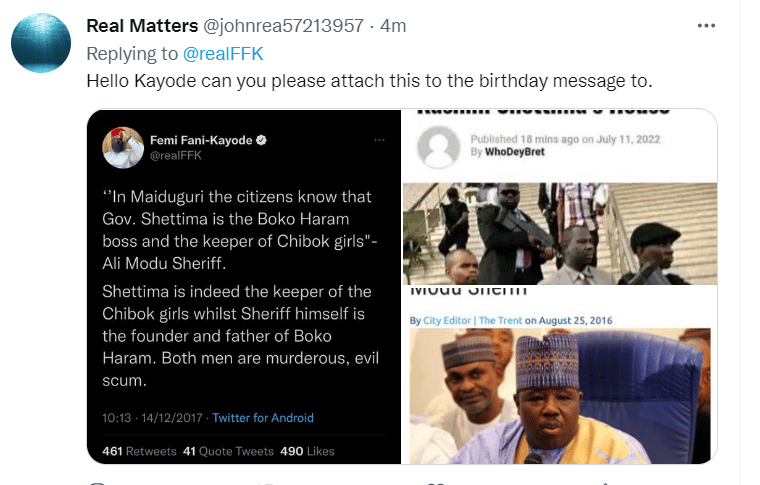 @Ifen55108Sesan: “bandit sponsor will be ur VP nextyear not NIGERIA”.

Kpatakpata! – “Na mouth boy you go remain Cos your pay masters will not smell Aso rock come 2023. In Obi’ cabinet, you won’t smell even the broom.”

Nnaemeka Edeh @NnaemekaEdeh1 – “While you have every right to celebrate your new sure meal ticket, I urge you FFK,to reflect on those innocent chibok sch girls that never Celebrated their birthdays. So many of them are dead,others traumatized because of evilagenda of senator Kashim Shettima your new meal coupon”.

lifemoneyhealth @de_prof_de_chef – “While FFK was still under investigation for his looting, He still moves around with Police escort. It was then I realized that Nigeria will be difficult to redeem. Little wonder He jumps from one party to another. He’s a coin man. Man with dubious character. He like the system.”

Forsby Ot @Forsby31 – “Unbelievable now you are calling him a humble man because you are now part of them. Karma knows everyone’s address Mr ffk.”