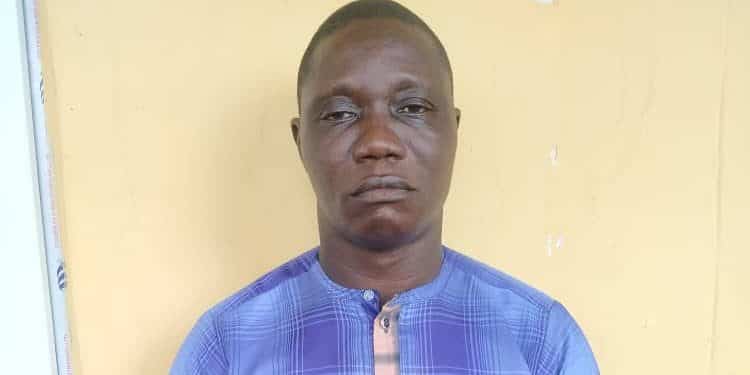 A pastor arrested by operatives of the Nigeria Police Force in Ogun State over alleged s3xual molestation of an underage girl has acknowledged the crime but blamed it on the devil.

The culprit whose name is given as Pastor Michael Abiodun said he discovered the girl was a virgin after he penetrated her.

A police report said the 48-year-old self-proclaimed pastor deceived the mother of the 12-year-old girl in the guise of performing some special deliverance at his church and took advantage of the child.

The father of three with his church located in the Oluwo axis of Owode Egba, in Obafemi-Owode local government area of the State was said to have ordered the victim’s mother who happens to be his church member, to send her daughter to the church for the special deliverance prayers.

Naija News learnt that Abiodun took advantage of the moment and forced the girl into a room within the church where he raped her.

Pastor Abiodun according to the police report, threatened the girl with evil consequences if she dare inform anybody about the incident.

The child kept mute until she reportedly got pregnant unknown to her and the mother. She later delivered a baby without anyone coming out to claim responsibility for fathering the baby.

Narrating the incident to newsmen on Friday in Abeokuta, the state capital, the Police Public Relations Officer (PPRO), Abimbola Oyeyemi, said the randy pastor was arrested following a report lodged at the Owode Egba Divisional Police Headquarters about the incident.

Oyeyemi explained that the victim’s mother had joined Pastor Abiodun’s church as a member and consequently surrendered the victim for the “special deliverance prayers” due to a certain spiritual problem that claimed the lives of her two previous daughters.

“The mother of the victim explained to the police that since her daughter has not been menstruating before, it was difficult for her to know that she was pregnant until seven months after.

“The victim, who was delivered of a baby three months ago informed the police that she was threatened by the Pastor of a dire consequences if she inform anybody about what happened between them and that was the reason she didn’t inform her mother,” Leadership quoted the PPRO as saying.

Oyeyemi further explained that the randy pastor has confessed to the commission of the crime, admitting he was the person who dis-virgined the victim who is a JSS 2 student.

“The Commissioner of Police, ‘Lanre Bankole has ordered that the suspect be transferred to the State Criminal Investigation and Intelligent Departments (SCIID) for further investigation and possible prosecution,” he stated.