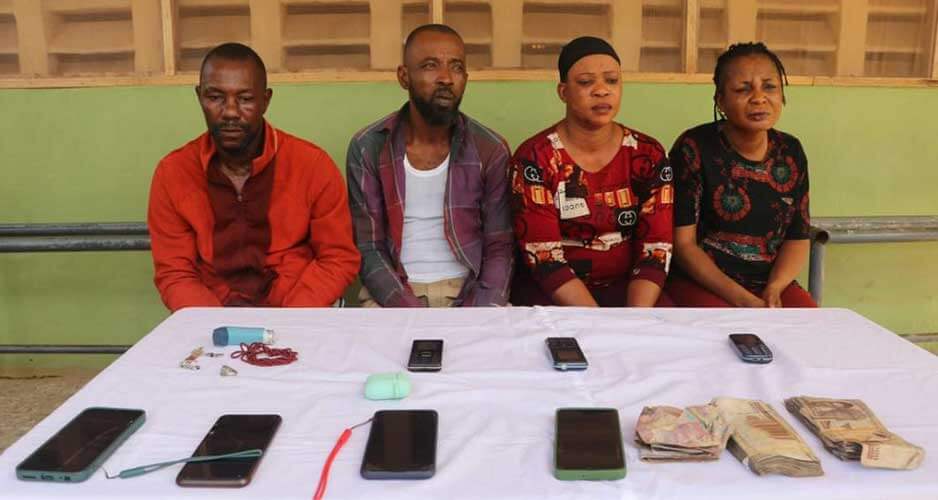 Two women amongst a notorious one-chance syndicate of four have been exposed by the FCT Police Command after their last operation led to their waterloo on Tuesday.

Naija News reports that the suspects were caught by irate passersby after pushing a female victim from a moving car along the Wuye area of the Federal Capital Territory (FCT), Abuja.

Spokesperson of the FCT Police Command, DSP Josephine Adeh on Thursday in a statement, noted that the suspects were rescued from the irate mob who burnt their operational vehicles after a hot chase.

Josephine also disclosed how the syndicates who have been operational for five years, go about robbing their victims.

The statement partly reads; “The surveillance team of the Wuye division, who were on routine patrol, with the help of residents rushed to her aid and gave the fleeing criminals a hot chase. The hot chase soon attracted the attention of mobs who spread the news of the arrest, gathering in their numbers to unleash mayhem on the suspects.

“The Police, however, tactically effected the arrest of the suspects, but the pressure from the irate crowd resulted in the burning of the operational vehicle of the suspects before the Police could move it down to the station.

“In light of the above, preliminary investigation has commenced. The suspects have revealed to the Police their modus operandi and how they have been in the criminal venture for over five years.”