Sanwo-Olu Gives Reasons Shettima Is The Right Choice For Tinubu 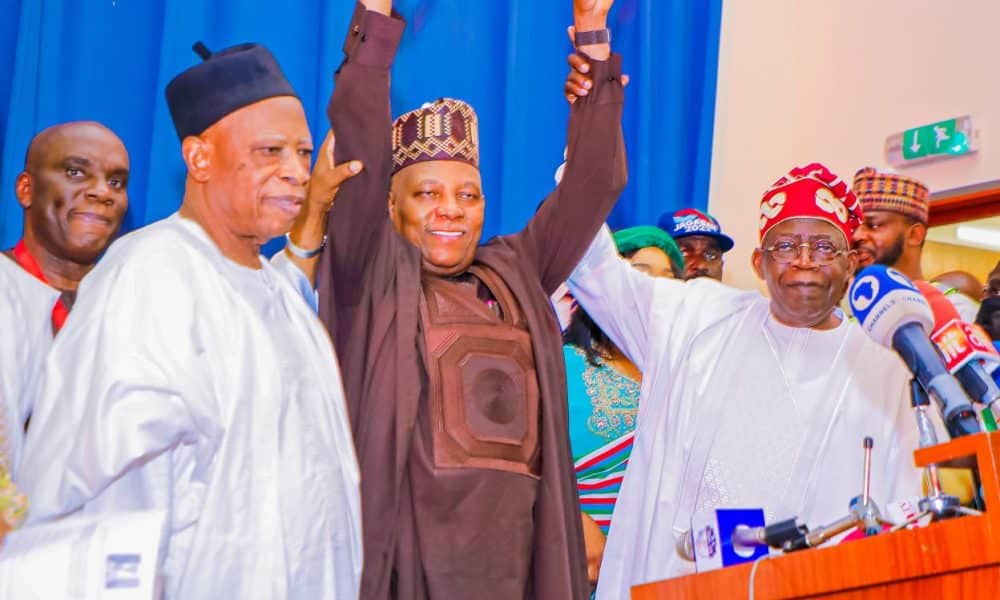 The Lagos State Governor, Babajide Sanwo-Olu, has averred that former Governor of Borno State, Kashim Shettima is the right choice for the All Progressives Congress (APC) presidential candidate, Bola Tinubu.

Naija News reports that Sanwo-Olu made this known in a statement by his Chief Press Secretary, Gboyega Akosile while celebrating the APC vice-presidential candidate on his 56th birthday, on Friday.

According to Sanwo-Olu, Shettima’s track record and contribution to Nigeria’s development, without any iota of doubt stood him out and earned him the ruling party vice-presidential ticket.

He stated that Shettima is a committed and visionary leader, who contributed not only to his state but Nigeria as a whole and has distinguished himself as a successful banker and public officer.

The statement read: “On behalf of my wife, Ibijoke, and the good people of Lagos State, I join family, friends, political associates, leaders and members of the All Progressives Congress to congratulate Senator Kashim Shettima, the running mate to our National Leader and presidential candidate, Asiwaju Bola Tinubu on his 56th birthday.

“Senator Shettima in the last three decades has distinguished himself as successful banker and public officer rising to the position of a General Manager in Zenith Bank before yielding the clarion call in 2007 to serve as Commissioner for Finance and Economic Development in Borno State.

“As a golden fish, which cannot be hidden, Shettima within four years served as Commissioner in five ministries – Finance and Economic Development, Local Governments and Chieftaincy Affairs, Education, Agriculture and Health under Governor Ali Modu Sheriff from 2007 to 2011. Having proved to be a trusted and committed manager of manpower and resources, his people elected him as Governor in 2011.

“Senator Shettima’s input in the growth and development of Borno State during his tenure as Governor is a clear testament to his visionary leadership. His developmental strides in the State are noticeable in different areas of endeavour to date. He has also distinguished himself in the legislative chamber as a member of the Senate, representing Borno Central.

“His penchant for diligence and contributions toward the development of Nigeria’s socio-economic and political landscape based on his service to the nation in different capacities in the past without any iota of doubt made him the right choice as the APC vice presidential candidate in the 2023 presidential poll.

“On this occasion of his 56th birthday, I wish ‘our incoming Vice President’ by the grace of God, good health and wisdom, as he continues to render more services to our dear country.”