Bandits Arrest Thief In Buhari’s Home State, Hand Him Over To Security Agents 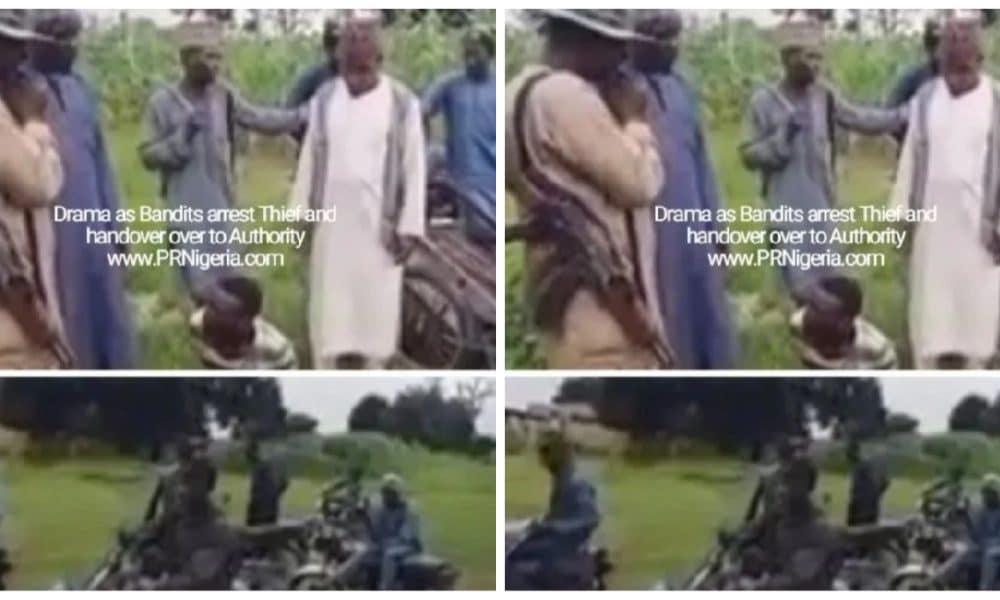 Bandits parading President Muhammadu Buhari’s home state, Katsina, have arrested a thief and ensured he was handed over to security operatives.

According to PRNigeria, the terror group was going about their operation when they sighted the scavenger stealing in an unnamed community in the state.

The suspect’s name was also not mentioned but reports said the middle-aged man is specialized in uprooting metal rods and removing iron bars from buildings in a deserted village in the state.

A photo taken from the event showed the moment the gun-wielding terrorists were parading the scavenger and his stolen metal rods inside a cart before a community leader.

The other part of the photo also showed when the suspect was handed over to the community leader.

Naija News could not confirm the exact day of the event, but PRNigeria mentioned that the bandits warned the thief sternly about the danger of stealing.

“Don’t you know that it is a criminal offence to steal? You are lucky that we are handing you over to authority we could have executed for engaging in criminal activities,” the bandits reportedly warned.

Having handed the thief over to the community leader, the terrorists told him to ensure the scavenger is dealt with according to the law to deter others from stealing.

They also reportedly monitored the community chief so as to ensure the suspect was later taken away by security personnel for interrogation.

Naija News understands that the event has left many Nigerians in awe, as some likened it to a kettle calling a pot black.