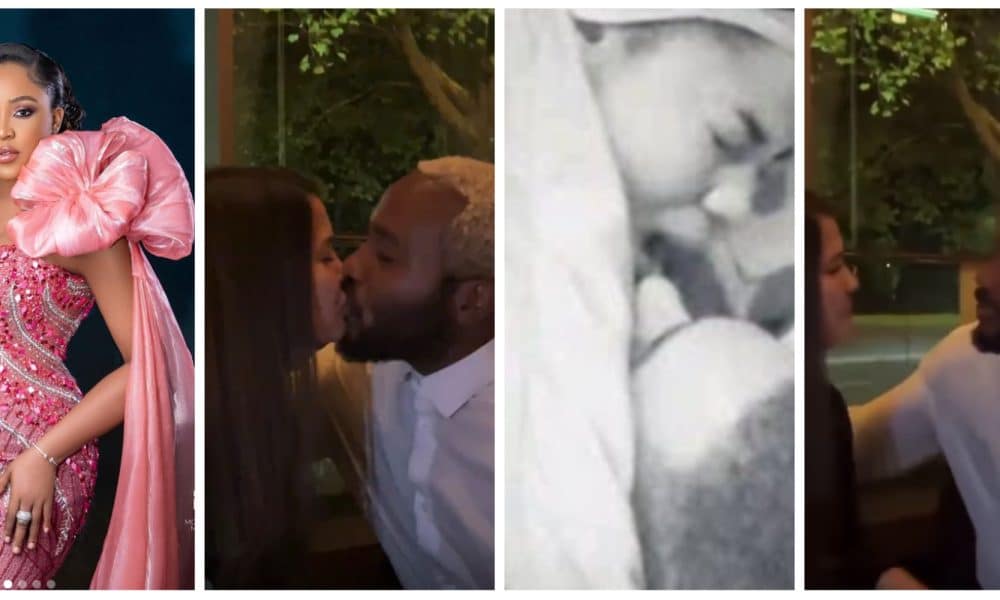 Former Big Brother Naija ‘LockDown’ Housemate, Erica Nlewedim has become a subject of mockery online after a video of her ‘boyfriend’ during the show with his fiancee emerged online.

Naija News recalls that Kiddwaya and Erica were an item during the reality TV show with Kiddwaya’s father also endorsing their romantic relationship.

Die-hard fans, who rooted for the relationship which they named ‘Kiddrica’, were anticipating a ‘Versace Wedding’ considering the financial status of Kiddwaya’s family.

On Monday night, popular media personality, Daddy Freeze took to his Instagram page to share a video of the reality TV star and his lover.

Kiddwaya and the white lady were at dinner with Daddy Freeze and celebrity UK-based pastor, Tobi Adegboyega.

The video captured the romantic moment Kiddwaya was feeding his fiancee and finally kissed her amidst cheers from everyone.

The billionaire’s son also asked if Pastor Tobi would join them in holy matrimony, and the cleric replied saying he would be honoured to do it.

He also added that he will be doing the same for Davido when he is ready.

This video has since sparked reactions on social media with Kiddwaya topping trends on Twitter and some others making a mockery of Erica.

@Steadyyboyy wrote: “I don’t know why y’all are calling Kiddwaya scum, do u expect him to take the girl he fvcked on National TV as his wife?”

@Asanwa72096848 wrote: “Kiddrica shippers goodmornin oh ! Just want u guys to know that kiddwaya is engaged and is not Erica! Now sheggz that always talks about marriage to Bella every eke market day”

@DragON_671 wrote: “She posted this .E pain her diee!! Kiddwaya level up and leave the local asaba actress and her toxic fans without looking Back. she’s now throwing shade at him on IG story..Erica your tears is sweet”