Muslim-Muslim Ticket: CAN Speaks On Making Deal With Bola Tinubu 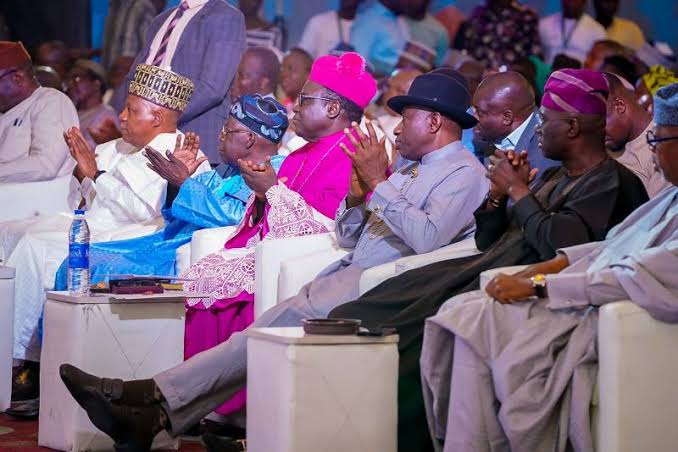 The Christian Association of Nigeria (CAN) has distanced itself from reports claiming that it has made a deal with the presidential candidate of the All Progressives Congress (APC), Bola Ahmed Tinubu.

Naija News reports that some Nigerians, including CAN, had berated Tinubu and the APC over its choice of a Muslim-Muslim ticket for the 2023 general elections.

Tinubu had picked a former governor of Borno State, Kashim Shettima as his running mate, a controversial move have been met with backlash.

Reports emerged on Monday claiming that Tinubu met with the leadership of CAN over the Muslim-Muslim ticket controversy.

But in a statement signed by the Special Assistant on Media to CAN leadership, Luminous Jannamike, titled, ‘Muslim-Muslim Ticket: CAN maintains its position,’ the association said it had not reached an agreement with Bola Tinubu.

CAN maintained that its opposition to the contentious Muslim-Muslim ticket remained unchanged.

It also stated that Tinubu’s presence and donation at last week’s 70th birthday of Catholic Bishop of Sokoto, Most Rev. Matthew Hassan Kukah, should not be seen as a financial inducement bribe to pacify the Christian community.

The statement partly read, “The attention of the leadership of Christian Association of Nigeria has been drawn to a media report titled, ‘How Tinubu met, resolved Muslim-Muslim ticket with CAN’, which claimed that the apex Christian body had changed its position regarding the same faith ticket.

“To say the least, the story is ridiculous, malicious, untrue and should be disregarded in its entirety by all reasonable members of the society.

“For the records, CAN took a position against the same faith ticket imbroglio under the leadership of Rev. Dr Samson Ayokunle, its immediate past national president and as a matter of fact, His Eminence Archbishop Daniel Okoh, stands on that same position.”

CAN berated inviduals trying to make political capital out of Tinubu’s presence at Kukah’s birthday celebration in Abuja, the nation’s capital.

It stated that the event was public and friends of Bishop Kukah and other good-spirited Nigerians donated to the building of The Kukah Centre, which is designed to be a veritable platform to propagate and promote the ideals of democracy.

The association insisted that Tinubu’s contribution had nothing to do with CAN, adding that it is mischievous for anyone to insinuate it was a sort of bribe money for Christian leaders to make a u-turn on its stance against the same faith ticket.

CAN said: “For the umpteenth time, the CAN reiterates that it is non-partisan, but remains willing to partner with all leaders and other relevant stakeholders towards achieving unity, peace and progress in our nation.”

The Christian body  oted that despite not agreeing with every decision taken by politicians and political parties, it respects their right to reach conclusions on issues that affect their electoral fortunes so long as they accord with the provisions of the 1999 Constitution (as amended) and Electoral Act (2022).

In a statement on Sunday, Shittu said Tinubu attended Kukah’s birthday celebration to show critics of his presidential ticket that he is not a religious bigot.

The former minister commended Tinubu for attending Kukah’s birthday celebration despite the backlash from the APC Muslim-Muslim ticket.

Shittu stated that Tinubu’s presence and brilliant delivery at the occasion had inevitably shamed and silenced the critics calling for Christians to vote against his candidacy.

He said the former Governor of Lagos was the cynosure of all eyes at the event, refuting claims that his attendance at the birthday celebration was a subtle attempt to reach out to Christian political leaders.