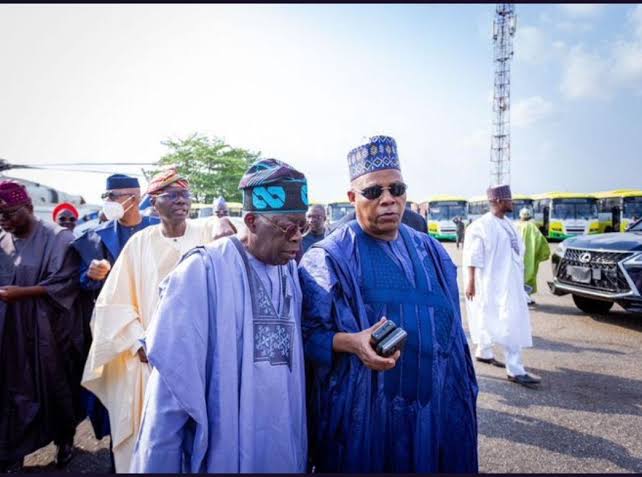 The presidential flagbearer of the All Progressives Congress (APC), Bola Tinubu, and his running mate, Kashim Shettima, are set to visit the National Secretariat of the party in Abuja.

Naija News learned that no official statement was released by the APC leadership regarding the visit of the party’s presidential candidate and his running mate to the secretariat.

However, several patrol vans were packed by the entrance of the secretariat and stern-looking security officers were placed in strategic locations leading to the “Buhari House” in Wuse, Abuja.

Also, there is a heavy security presence inside the ruling party’s secretariat in preparation for the visit of the former Governors of Lagos and Borno states.

Tinubu and Shettima are expected to attend an ad hoc meeting of the APC National Working Committee (NWC) at the secretariat on Wednesday at 10:00am.

In a chat with The Punch, a source said the visit will provide an opportunity for Tinubu and Shettima to discuss their campaign manifesto with the APC leadership and restrategise ahead of the political campaign, which kicks off on September 28.

The source also warned that the number of visitors coming into the secretariat would be greatly restricted as a means of crowd control measure and for security purposes.

After meeting with the party leadership, Tinubu and Shettima are expected to address the APC press corps at the Media immediately after the meeting.

This news platform understands that this development is coming barely three months after the party national leader postponed his maiden visit to the secretariat following his victory at the APC Convention.