Atiku vs Wike: 15 Out Of 19 PDP NWC Members Plot Against Iyorchia Ayu 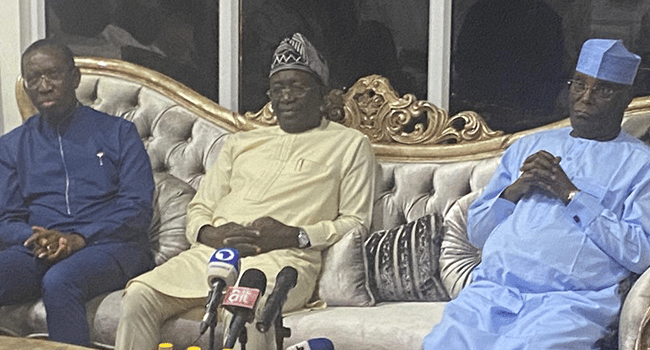 About 15 members of the Peoples Democratic Party (PDP) National Working Committee (NWC) have allegedly resolved to back calls for the removal of the party’s National Chairman, Senator Iyorchia Ayu.

Naija News reports that the PDP presidential candidate, Atiku Abubakar, and Governor Nyesom Wike of Rivers State had been at loggerheads over the failure of the PDP National Chairman to resign.

Wike and his allies, who have lamented the sidelining of the South in major positions of the party, had demanded Ayu’s resignation, amongst others, for the PDP to have peace.

Ayu had in 2021 said he would resign as PDP national chairman if a northerner became the party’s presidential candidate.

According to Vanguard, some members of the NWC from the Southern part of the country expressed the opinion that the party’s National Chairman could have handled the PDP’s crisis better at the NWC meeting, presided over by Ayu at the National Secretariat.

Though the meeting dwelt heavily on the agenda to be presented to the party’s caucus and NEC, the party’s effort to reconcile aggrieved members also featured.

It was also gathered that a group of 15 out of 19 NWC members held a meeting at the Abuja residence of a prominent member (name withheld) on Tuesday night.

They reportedly resolved to pass a vote of no confidence on the National Chairman.

A source said: “The meeting was basically to iron out some housekeeping issues such as the membership and structure of the Presidential campaign council, how to handle disagreements in some state chapters, especially Kano and Osun States.

“The party will decide whether to have congresses or some form of ad-hoc arrangements among others.“

Speaking further, the source said: “Issues discussed also included the party’s reconciliation efforts. It was noted that the NWC needs to do more to resolve the dispute because as things stand, what we see are individual and group efforts.”