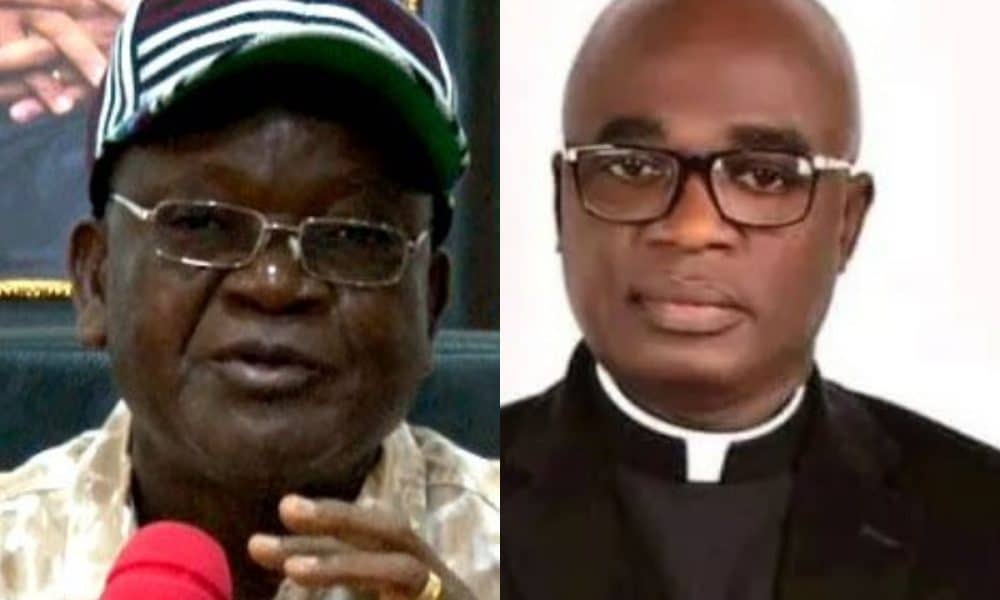 Benue State Governor, Samuel Ortom has dragged the All Progressives Congress (APC) governorship candidate in the state, Hyacinth Alia, describing him as a renegade priest who doesn’t understand what it means to lead.

Ortom added that rather than abuse past leaders of the state, Alia should rather focus on the legal battles facing him including the allegations that his name is not found in the party’s register.

Naija News the Governor’s submission comes as a response to an earlier allegation from the APC candidate.

Alia had alleged in his own statement that all past Governors of the state have looted and are responsible for the underdevelopment of Benue State since its creation in 1976.

The APC candidate described himself as the messiah on a mission to rescue the people of Benue.

However, Ortom in his reaction via a statement by his Special Adviser, Media and Publicity, said Alia is an untested opportunist who doesn’t understand what it means to govern a state.

He also accused the APC candidate of planning to work with some powerful forces to trade the fortunes of Benue for personal gains.

Ortom urged Alia to control his tongues rather than dabble into things he does not understand.

The statement reads, “The contumacious priest is playing to the gallery to curry unmerited favour and praise from unsuspecting people. His attack on the present and previous administrations in the state smacks of hypocrisy, mischief and crass ignorance of what development entails.

“We challenge Alia to publish his track record of achievements qualifying him to seek the office of Governor. Becoming a Governor takes more than merely dancing to the vulgar songs of party supporters who insult opponents daily on the streets.

No Evidence You Can Lead

Ortom stated that Alia does not have any developmental track records in his previous career, wondering how such a person intends to serve the entire Benue State meritoriously.

“Here is a man who does not have any evidence of development in all the places where he worked as a priest before his suspension by the Church. If he could not bring growth to any of the Churches where he served, how can he develop a large entity like the state?

“Thousands of Benue people have been displaced as a result of flooding and herdsmen attacks, but Alia who claims to love the people and “wants to liberate them” has never visited any of the IDP camps to support and pray for the victims. Service to the people does not only happen when a man becomes a Governor.

“An aspirant whose name is not found in the register of the party he claims to be flying its flag needs to be bothered about the web of controversies surrounding his emergence, more than what the previous governments did and what the next Governor of the state plans to do.

“The belligerent and purported APC candidate ought to face his plethora of legal battles arising from the yahoo yahoo primaries conducted by the party which produced him, yet, as a dubious character, he openly hailed the process as transparent.

“The renegade priest should go and contend with the numerous court cases confronting him. His self-appointed role as a latter day critic is not only preposterous but also amounts to a pretentious posture which negates reason. He is the first and so far the only Nigerian who is said to be a political party candidate but has been vehemently resisted and rejected by all other aspirants and many members of the party.

“Benue people are already weary of Alia’s undercover deals with vested powerful interests outside the state to trade the people for a pot of porridge and his cravings for material wealth.

“Governor Ortom and the former Benue Governors (except one) had no hand in the blunders and willful disregard for due process that characterized the APC primaries in which Alia was a mismatched beneficiary”.