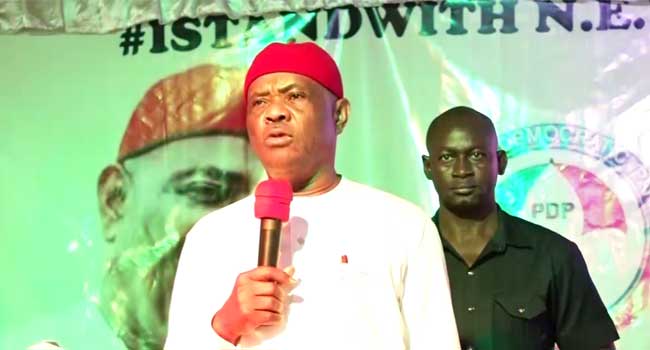 Governor Nyesom Wike of Rivers State has claimed that the Peoples Democratic Party (PDP) and its presidential candidate Atiku Abubakar are arrogant because someone in the presidency is backing them.

Speaking in Rivers State on Thursday, Wike said the same forces at the Presidency promised someone the presidential ticket of the All Progressives Congress (APC) but failed to deliver it.

According to him, the National Chairman of the party, Iyorchia Ayu, refused to honour his promise to resign because he was banking on the presidential backing.

He promised to reveal the identity of the person at the Presidency backing Atiku and the PDP.

Speaking at the commissioning of Ahoada Campus of the Rivers State University in the Ahoada East Local Government Area of the state, Wike said insisted that the chairman of the PDP must step down despite the resignation of Walid Jibril as the Board of Trustees chairman.

According to Wike, Atiku had assured him that Ayu must vacate his position as party chairman.

The governor said Walid Jibril’s resignation as the Board of Trustees chairman won’t stop his demand for Ayu’s removal.

According to Wike, the issue at hand is that of justice and fairness, saying having produced the presidential candidate of the party, the north should not also hold on to the chairmanship of the party.