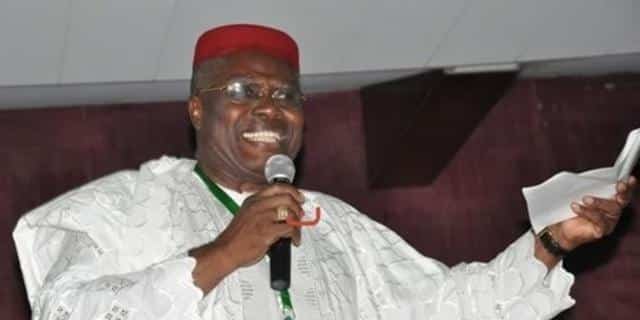 The new chairman of the Board of Trustees of the Peoples Democratic Party (PDP), Adolphus Wabara, has reacted to the crisis rocking the opposition party.

Naija News reports that the internal crisis rocking the party began after the emergence of former Vice President, Atiku Abubakar as the party’s 2023 presidential candidate with the Rivers State Governor, Nyesom Wike who was defeated at the May primaries in Abuja, feeling cheated.

The Rivers governor, however, has been making demands, the top of which is the resignation of the national chairman, Iyorchia Ayu as a condition for peace. All attempts made so far to resolve the crisis have not yielded positive results.

Speaking at the PDP NEC meeting on Thursday, Wabara cautioned against reckless statements by members that can further escalate this crisis.

The former President of the Senate said the PDP has an inbuilt mechanism to solve problems.

He said: “I want to advise us that we should always de-brief ourselves in-house no matter what the anger is, rather than playing to the gallery. We should watch and control our utterances because by and large, only God knows tomorrow.”

This news platform reports that Wabara emerged as the new PDP BoT Chairman following the resignation of Senator Walid Jibrin on Thursday.