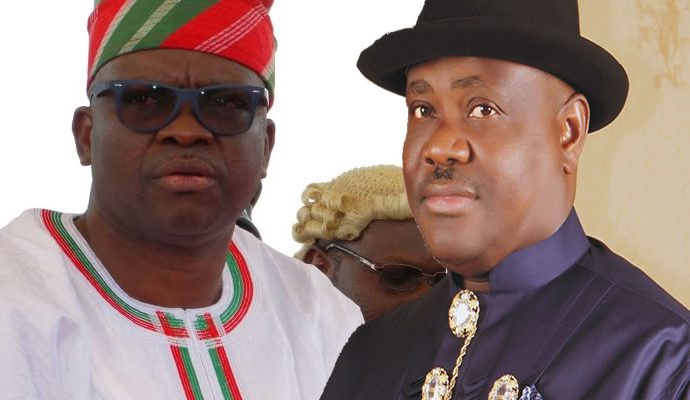 Speaking on Friday, Fayose declared that contrary to what many believe, Wike is not out to destroy the PDP but to ensure that justice prevails.

He also called on the presidential candidate of the PDP, Atiku Abubakar to avoid sycophants urging him to ignore Wike and his people, declaring that such people are the real enemies of the party.

According to Fayose, the Wike camp is open to resolving the crisis but Atiku must do the right thing by reaching out to those he should, uniting the party and ensuring the PDP goes united into the 2023 elections which is the only guarantee that the party will win.

He added that he is supporting Wike because he knows the Rivers Governor is on the right path based on earlier discussions with Atiku immediately after the PDP presidential primaries in Abuja.

He added that Wike is the soul of the PDP who has done so much and continues to do much more to ensure the PDP remains relevant.

Addressing Wike, he said: “Whatever anybody says about you, posterity will be on your side. It is a matter of time. When I was a Governor of Ekiti, I honoured people when they were alive not when they were dead. You have honoured yourself by your handwork.

“Forget whatever anybody says about you. I said it before Wike, a man with a fierce look but with a good heart, a heart of will to accomplish, to love and to support. Majority of your enemies today are not against you because of anything. They are against you because they know you have capacity.

“There is no living being in this party or outside that will not acknowledge your contributions to this party. You are the soul of this party. Even till now what you do how many people do it?

“There was a time in this party when I was a sitting governor, I was a nightmare to the APC and the Buhari’s government. That time when you woke up you would see Fayose. But today when you open television, you will see Wike. As your senior brother I was a lion that time. Your good works will never go unrewarded.

“The people that had benefitted from you are the people that pull you down. When sitting governors were defecting, we stood the test of time. We never for one day looked at the eyes of the APC. The good man in the history of the Bible is always the enemy of the people who don’t like the truth. Continue to do your best. Don’t give up”.

Speaking further, Fayose said Atiku should not listen to those who are urging him to ignore the Wike camp, stating that the PDP can surely win the 2023 polls but only with a united effort and Atiku needs to take the initiative but he won’t stop speaking his mind.

Fayose said: “I believe this party will come together. I believe the needful will be done because winning an election is all that matters. Wike hasn’t come out to say Atiku Abubakar is not the presidential candidate. He is.

“I was there the second day after the election when our candidate visited the residence of Wike. We had mutual conversation. We were all happy and everything was in place to move forward. I spoke at that meeting. We don’t want to aggravate the situation. I am only appealing to people that matter. In every political party there will be groupings, same family with different interests.

“We can do better than we are doing. People around the corridor of power, allow this candidate to win election. They say Fayose is now Tinubu’s man. When people were defecting, I never did. Loosing Ekiti election, if I go into that now you will know the source but it is not important because we must put things behind us and move forward.

“Some people believe that they have to destroy their leader before they can rise. If you are destroying any leader, you can’t rise. Wike is not a saint neither am I one. Don’t expect perfection from me. We will not want to come to Rivers here and tell Wike what he wants to hear. We will speak our mind.”

What I Told Atiku After The PDP Primaries

Fayose went ahead to open up on what he told Atiku when the PDP presidential candidate visited Wike following the conclusion of the party’s presidential primaries.

He said nobody is denying the fact that Atiku won the primaries, but the former Vice President needs to carry everyone along and not allow some people close to him to cause rift between him and the party stakeholders.

He said: “I remember I said something the day the candidate visited Governor Wike. I told him the knife is in your hand, the yam is in your hand. Cut it in a way that it will be edible. It is still not late. We can still achieve cohesion. We can still stay together and win this election. Use the knife to cut the yam and make it edible.

“Don’t let people come to you and tell you that ‘these do not matter, leave them with their local politics’. You are the man that wants to lead us. God will give you wisdom to rally everybody. My own son is a candidate in the party. He is a PDP candidate. Do I wish my son to fail? No. George Fayose is my son. With the last drop of my blood, I will stand by him.

“I came out to say it is the turn of the south, that is the position of that group at the time. I want to say to you that everybody has a way to ventilate their anger. It is not enough to allow people who do not have substance to come and destroy the party that God has given you as a candidate.

“Wike is not saying he is the vice-presidential candidate and he is not looking for it. It is important that winning this election is the ultimate, let us win together. I believe in due course, this group will meet and all their intention is let us win together.

Wike Is A Major PDP Pillar

The former Ekiti State Governor went ahead to praise the contributions of Wike to the survival of the PDP, declaring that the Rivers State Governor is the lifeline of the party and will continue to enjoy his support.

“You have been the lifeline of this party and anybody wishing you away is an enemy of this party. I appeal to Atiku and those in the corridor of power, let us do more to unify the party. I am with Wike. Wike is in PDP, I am in PDP”.