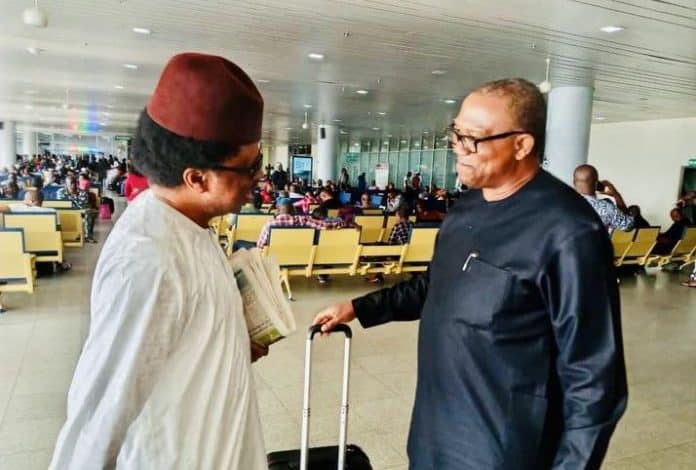 The former lawmaker representing Kaduna Central in the National Assembly, Shehu Sani, has asked Labour Party (LP) presidential candidate, Peter Obi, to remember him when he finally received monetary support from his kindred in the diaspora ahead of the 2023 election.

Sani who has found shelter in the Peoples Democratic Party (PDP) camp, took to Twitter on Saturday morning to jokingly ask the former Governor of Anambra State who he referenced as his good friend, to send him something [money he jokingly meant].

The 8th national assembly lawmaker, however, cursed Obi’s enemies, saying they shall suffer.

“Dear Bro Peter, when our Brothers and Sisters in the diaspora gather and send something, just remember your good friend in Kaduna. I can’t deny you. The enemies of your blessings shall suffer,” Sani’s tweet reads.

Nobody Has Given Me Anything – Obi Denies $150m Diaspora Campaign Funding

In a statement on Monday, Obi refuted viral reports that his journey abroad was to solicit funds for his campaign.

Naija News understands that Obi was reacting to a call by a support group under the aegis of Tinubu-Shettima Connect, asking the Independent National Electoral Commission (INEC) to disqualify him from the 2023 presidential race over violation of the Electoral Act on campaign funding.

But in a statement on Sunday, the Obi-Datti Media Office on behalf of the LP flagbearer described the allegation of violating the electoral act external funding for elections as desolate and baseless.

The statement added that Obi’s trip was to sensitise and carry along Nigerians abroad on his upcoming agenda of rebuilding the country.

It said Obi’s foreign trips have become a worry to the ruling All Progressives Congress (APC) because its leaders cannot meet Nigerians in diaspora knowing that they contributed to their leaving the country in the first place.