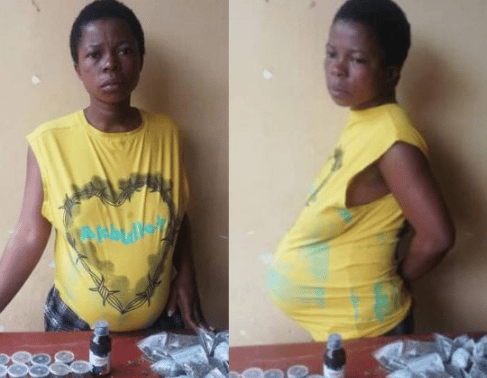 A 25-year-old pregnant woman, Haruna Favour has been nabbed by the National Drug Law Enforcement Agency (NDLEA) with 82 pinches of methamphetamine in Auchi, Edo State.

Naija News reports that Favour was arrested on Friday, September 9, with methamphetamine and various quantities of Loud, Arizona, and Colorado variants of cannabis and codeine-based cough syrup.

Confirming the development, the Director of Media and Advocacy of NDLEA, Femi Babafemi, said the arrest occurred on Sunday, September 11.

He also noted that another suspect Paul Ali, aged 47 in Kogi State was arrested on the Okene-Abuja highway with 1,404 bottles of Codeine based syrup weighing 190.94kg and 2,040 ampoules of pentazocine injection coming from Onitsha, Anambra State to Sokoto State.

According to the anti-hard drug agency, Effiong was captured with three drums loaded with crystal methamphetamine locally known as Mkpuru Mmiri.

NDLEA confirmed the arrest in a statement released on Sunday, August 7, 2022, noting that the drugs were imported to Nigeria from India.

The consignment seen with the trans-border drug dealer reportedly weigh 90 kilograms and was loaded into a commercial bus with registration number RSH 691XC at Ojuelegba in Lagos.

Effiong was intercepted during a stop and search operation along the Umuahia-Ikot Ekpene highway on Saturday, August 26.