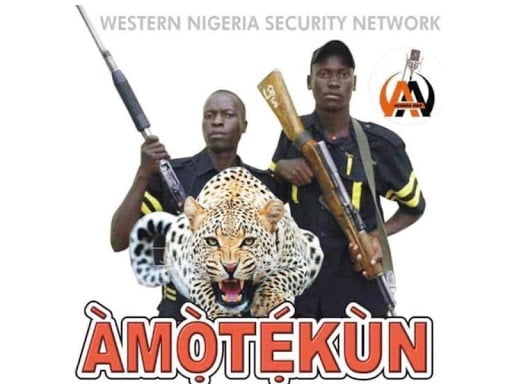 The Ogun State Command of the South-West state’s security outfit, Operation Amotekun, have explained why they shot a young man on his leg months ago.

Recall that Amotekun Corps had arrested the middle-aged man, Ayodeji Eweje in May 2022 and took him to their office at Oke-Ilewo.

Naija News understands that the mother of the victim, Amoke Eweje, only learnt about her child’s arrest from officers of the Nigeria Police Force in the community many hours after.

In her narration earlier, the distraught mother said her son had gone out on May 24, 2022, to witness the inauguration of the Adigbe-Panseke road by the Osun State Governor, Dapo Abiodun.

Eweje said her son was nowhere to be found after the event, hence she immediately reported the incident at a police station in Abeokuta where she was told that her son is with the Amotekun corps.

Narrating his ordeal to newsmen from his sick bed at the Federal Medical Centre, Abeokuta, Ayodeji said he was never told what his offence was.

He said, “I joined other onlookers at the overhead bridge at Panseke when the law enforcement officers told us to leave, I obeyed, but maybe the man thought I was not fast enough, he gripped me and handed me over to the Amotekun corps. After the event, rather than letting me go, the Amotekun men took me to their office at Oke-Ilewo without telling me what my offence was.

“What I can remember was that on a certain Sunday evening, I was told to come out and on getting out, an officer told me to climb into the roof for a certain repair of the office. While doing that, another one came and shot at me, alleging that I wanted to escape from custody.”

Why Our Officials Shot At Ayodeji

Reacting, however, to the victim’s claims, the Ogun State Commander of the Amotekun Corps, David Akinremi, said Ayodeji and his gang had been on the command’s wanted list for over a time now.

Akinremi alleged that the victim belonged to a notorious cult group that has been tormenting residents of the Adigbe area of Abeokuta.

He said, “When he was apprehended at Panseke during the commissioning of Panseke Adigbe road by the governor, Prince Dapo Abiodun, and handed over to us, he was taken into our custody and we began an investigation into his past deeds.

“It was during the investigation that he escaped to Imeko, where he was apprehended again. We tried to profile him again, but in the process, he wanted to escape through the ceiling of the custody he was kept in. It was then our personnel shot at his leg, and immediately we took him to hospital for treatment.”

I Want Justice For My Son

Lamenting the situation, Ayodeji’s mother argued that her child was not a cultist and that the Amotekun corps have abandoned him at the hospital since they damaged his legs.

She demanded justice stressing that her son can no longer walk with his leg because of the gunshot.

“It was through the police that we were able to know that truly, Ayodeji was with the Amotekun Corps, and was taken to their Imeko-Afon office for a reason known to them. Now, they have destroyed his leg, he cannot walk again. They just abandoned him there at the Federal Medical Centre, Abeokuta without taking care of his hospital bills,” Eweje said.