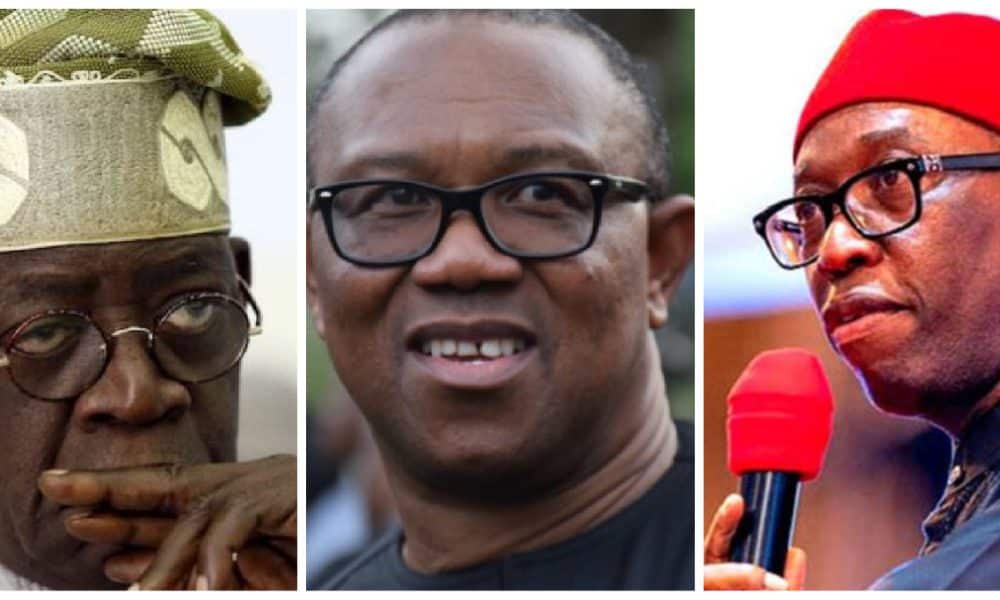 The Delta State Governor berated Obi’s recent visitation to Christian worship centres across the country, saying he does not believe in playing politics with religion.

Okowa, who spoke at the Northern Christian Youth Assembly Summit in Abuja today, also mocked the presidential candidate of the ruling All Progressives Congress (APC) Bola Ahmed Tinubu and his running mate, Kashim Shettima over the controversy surrounding their single faith ticket.

Speaking at the event, Okowa condemned the idea of cyber-bullying by supporters of other presidential candidates which he said won’t stop him from speaking the truth about the situation in the country.

In his remark, the National Chairman of the PDP, Senator Iyorchia Ayu, who was also present at the gathering, explained that the party’s presidential candidate, Atiku Abubakar, picked Governor Okowa as his running mate above his Rivers counterpart, Nyesom Wike, because of humility and more excellent performance in office.

2023: APC Has Taken Nigeria From Top To Bottom – Ortom

In a statement via his Chief Press Secretary, Nathaniel Ikyur on Tuesday, Benue State Governor, Samuel Ortom, accused the All Progressives Congress-led government of bringing the economy of the country to a total collapse.

Naija News reports that Governor Ortom said the APC has performed poorly in the past seven years and the Peoples Democratic Party (PDP) is ready to rescue the country from the ruling party in 2023.

The governor, therefore, said the ruling party will lose the 2023 election after performing abysmally in the last seven years.

He said: “They’ve (APC) kept their promise to take Nigeria from top to bottom. They have taken our country to the bottom. It’s a big shame. For us in the PDP, the onus rests on us to mend the cracks in our party. No external influence will do that for us. By the grace of God, we will reach a successful end so that we can move on.

“So long as the Independent National Electoral Commission (INEC) is as professional and neutral as it was in Osun and Ekiti states, I don’t see the APC winning the elections.

“Having been in politics from the grassroots, the state and national levels for over 40 years now, there’s no magic the APC can conjure to win in 2023.

“Some of their leaders who think they are powerful, have indirectly visited wickedness on the generality of our people in the name of being close to Aso Rock.”

Ortom alleged that some members of the APC prevailed over the federal government not to release funds to his state to pay salaries and pensions.

“We applied for a bailout of N42 billion from the federal government to enable us to offset long-standing arrears of salaries, pensions and gratuities. Some of these people scrambled to the state house to tell the president not to release the funds even after approval so that we will not take the credit for solving the age-long problem. This is the kind of mean-spirited attitude APC is inflicting on our people,” Ortom added.