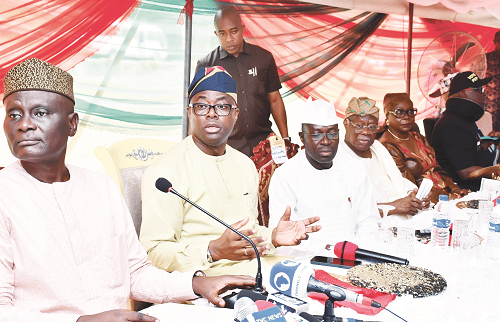 Governor of Oyo State, Seyi Makinde and his counterparts in the South-West are reportedly in a closed-door meeting ahead of Peoples Democratic Party (PDP) presidential candidate, Atiku Abubakar’s visit to the region this week.

Naija News understands that Atiku is expected to be in Lagos State on Tuesday, September 13, 2022, at the Commerce House, 1 Idowu Taylor Street, Victoria Island to speak at the event titled: “Private Sector Economic Forum’ ahead of the 2023 presidential election.

Reports, however, emerging claimed that the leaders of the PDP in the South-West are meeting in Ibadan, Oyo State capital to deliberate on the crisis rocking the opposition party ahead of the 2023 polls.

The party stakeholders are said to be pushing hard for the zone to produce PDP’s next National Chairman.

A source who spoke anonymously with Vanguard Newspaper said the emergency meeting was to discuss the future of the PDP in the South West and Atiku’s visit to Lagos and Oyo states.

They May Boycott Atiku’s Visit To South-West

A different source according to the news platform also disclosed that Makinde and other party leaders may boycott Atiku’s visit to the southwest states.

However, another claimed that the leaders are insisting only on Ayu’s resignation to pave way for the South West to produce the next national chairman of the party.

“Atiku is coming today to Lagos and he is going to Ibadan on Wednesday, the plan is to boycott meeting with him. They want to be spoilers and I heard they are tilting towards Peter Obi. From what I know, former President Olusegun Obasanjo is the one guiding the Wike’s team to throw their weight behind the Presidential candidate of the Labour Party, LP, Mr Peter Obi in 2023,” Vanguard quoted a source as saying.

On a different note, a source reportedly privy to the reconciliation committee, said that the South-West are not only concerned with getting the chairmanship slot, but that it is what is fair and just and that has been their position in the Rivers State Governor, Nyesom Wike’s team.

“It is not about Wike alone, so many people feel that is what should happen,” the source reportedly said.

Naija News, however, understands that Wike has kept leaders of the PDP in a confused state, guessing over his next move following a vote of confidence passed on the Senator Iyorchia Ayu-led National Working Committee.

Wike and his allies are on the cause to see Ayu resign from his position as a precondition for peace.