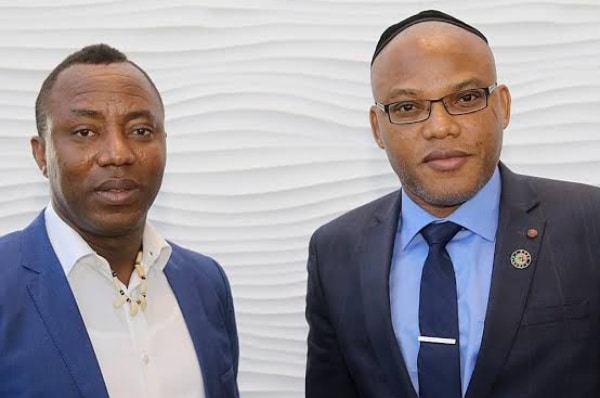 The presidential candidate of the African Action Congress, Omoyele Sowore, has revealed that all the leader of the Indigenous People of Biafra (IPOB), Nnamdi Kanu ,want is Justice.

The Appeal Court, according to the Punch, reserved its judgement on Kanu after his lawyer, Mike Ozekhome, who led the delegation of legal practitioners representing the IPOB leader, urged the court to strike out the remaining charges for a lack of credibility.

The court adjourned the matter indefinitely.

“Today, I attended the continued trial of the IPOB leader, Nnamdi Kanu, at the Court of Appeal in Abuja. I met his lawyers, Mike Ozekhome (SAN), Aloy Ejimakor and Ifeanyi Ejiofor, and many others as they concluded arguments asking the appellate judges to quash the remaining charges against Kanu.

“The unjust incarceration, torture, and extraordinary rendition involved in his trial is clearly a reason Nigeria under the Buhari regime may never achieve peace, progress, and prosperity.

“I’ve met Mazi Kanu in person and I understand him well enough to state that what he wants is justice,” Sowore said.