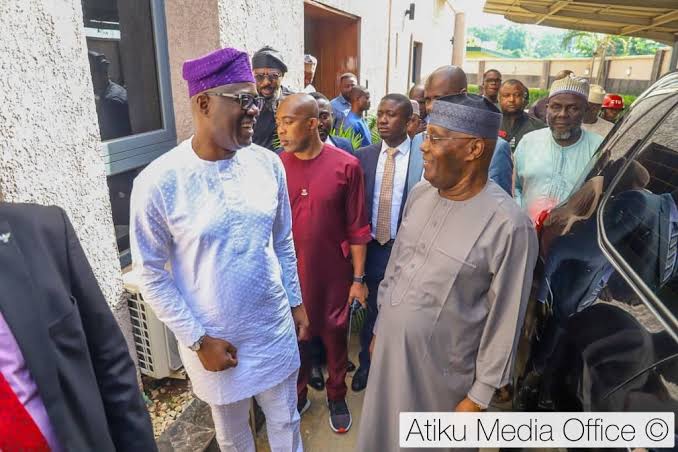 The presidential candidate of the Peoples Democratic Party (PDP), Atiku Abubakar, is set to meet with Governor Seyi Makinde of Oyo State amidst the crisis rocking the party.

Atiku is set to meet with the party leaders in the South West on Wednesday at an event centre at the University College Hospital (UCH), Ibadan.

In a statement on Monday by its zonal spokesman, Sanya Atofarati, the South West PDP lauded Atiku for making the region his first point of call, saying that it was a right step in the right direction.

The PDP said the choice of the South West by Atiku is a clear signal that the opposition party is one united and indivisible family.

He said: “The choice of Ibadan as the first port of call by the candidate is a clear signal that the PDP is one united and indivisible family which is committed to delivering the zone for the party’s candidate in the February presidential election.

“The visit could not have come at a better time than now in view of the ongoing reconciliation and fence mending moves by top hierarchies of the party at different levels to address various interests and agitations within the party which were blown out of proportion by the ruling APC.

“As a truly democratic institution the PDP welcomes all shades of opinions and interests which sometimes might be misconstrued by the general public as crisis, but the inherent internal mechanism for conflict resolution of our party has set the PDP apart from our main challenger and the outcome of the recent reconciliatory moves has begun to bear fruits.

“I must also commend Governor Seyi Makinde for his exemplary leadership in the zone as he is billed to receive the visiting former vice president on Wednesday and put in place logistics for the success of the event.

“Governor Makinde has once again demonstrated capacity to distinguish between self-interest and party supremacy because the PDP umbrella is our defining symbol which must be guided jealously going forward.

“I have always held the opinion that the PDP cannot afford to fail Nigerians.”

Naija News reports that Makinde alongside some PDP governors has pitched a tent with Governor Nyesom Wike of Rivers State over the lopsided leadership positions in the party.

Wike and his allies have been having a running battle with Atiku following his emergence as the party’s presidential flagbearer.

They have insisted on the resignation of the National Chairman, Iyorchia Ayu, to pave the way for the position to come to the South.

The Rivers governor and his camp are claiming the party’s presidential candidate and the national chairman cannot come from the same region.