2023: Details Of Atiku’s Meeting With Jandor In Lagos Emerge 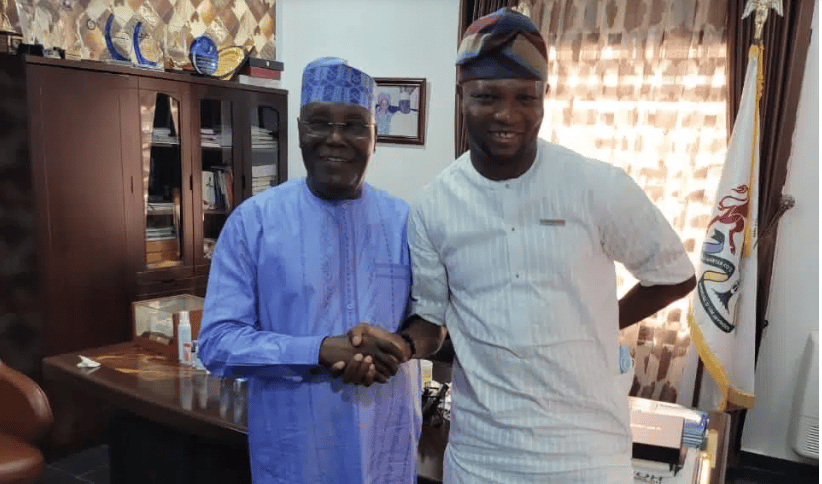 Naija News reports that Atiku met with Jandor in Lagos State on Tuesday at a stakeholders’ meeting with party members, leaders and candidates for various positions in the 2023 elections.

Speaking at the meeting, the former Vice President expressed confidence that the opposition party will emerge victorious in the 2023 Lagos governorship election.

He applauded the party leadership in Lagos for the level of mobilisation of party members and urged the party stakeholders to work harder to achieve the feat.

Atiku said: “Now, in all my political career, we are the people who established PDP, I have never seen Lagos state mobilized like this.

“Therefore, we are ready to support you to any level to make sure that you win Lagos state. You know, when I say I am going to do something, bring the sky down, I will make sure I do it.

“Therefore, I want you to work harder, we will cooperate with you, we will support you and protect you to make sure that this time around, you win Lagos state.”

In his remarks, Adediran said the people of the state are hopeful of the PDP presidential candidate to rescue the country from the All Progressives Congress (APC).

He said the party members in the state had spoken to themselves and had decided to focus only on the Abubakar-Okowa Project.

He said, “I have come to see for myself that PDP is on ground in Lagos state, and I have seen things for myself.

“That makes me believe that this time around ‘Jandor’ (PDP governorship candidate) is going to be the next governor of Lagos state. You will see what we are going to do when the campaigns start.”

“We have spoken to ourselves and we have decided to say, regardless of whatever is happening anywhere, what is paramount to us is to deliver Nigeria and Lagos state for the PDP.

“We appreciate you, we believe in you, we cherish you. What we want is a president of the Federal Republic of Nigeria come 2023 and that is what we have in you. Our concern is the 2023 election.

“I want to appreciate you personally for believing this time that we are going to deliver Lagos state for the PDP.”