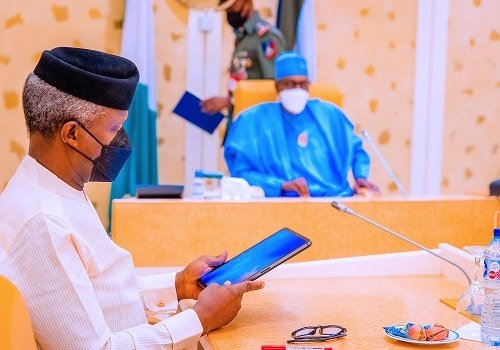 Naija News reports that the meeting was held at the Council Chambers of the State House, Abuja.

The Vice President of Nigeria, Yemi Osinbajo, Chief of Staff to the President, Ibrahim Gambari, and the Secretary to Government of the Federation, Boss Mustapha were physically in attendance.

Others include Minister of Transportation, Muazu Sambo, Minister of Science and Technology, Adeleke Mamora, Minister of Health, Osagie Ehanire and the Minister for Works & Housing, Babatunde Fashola.

The Ministers of State for Transportation, Ademola Adegoroye, Minister of Petroleum, Timipre Sylva and Minister of Science and Technology, Henry Ikoh.

The Head of Civil Service of the Federation, Folashade Yemi-Esan and other Ministers attended the meeting online from their various offices in Abuja.