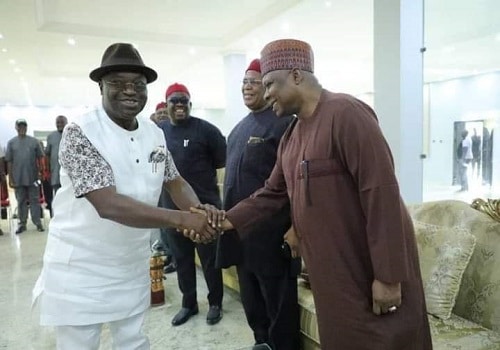 The details of the meeting between Governor Okezie Ikpeazu of Abia State and members of the Peoples Democratic Party (PDP) Board of Trustees have emerged.

Naija News reported that the PDP leaders met with the governor on Wednesday at his country home in Umuobiakwa, Obingwa Local Government Area of Abia.

The PDP BoT members were led to the meeting by former Senate President and Acting Chairman of the BOT, Senator Adolphus Wabara.

Ikpeazu, in a statement released by his spokesman after the meeting, Onyebuchi Ememanka, told the PDP BoT members that the party should take decisions that would end the internal crisis rocking it.

He stressed that the party leadership should employ measures that would stabilise the party in order for it to win the 2023 presidential election.

The governor also pledged to assist the BoT to resolve the problems confronting the party with a view to ensuring that the PDP clinches victory in 2023.

The statement quoted Wabara as saying the visit to the governor was meant to ensure victory for the party in next year’s elections.

The former Senate President said the visit to PDP governors and other stakeholders is to find a lasting solution to the crisis rocking the party and to ensure that its presidential candidate, Atiku Abubakar, wins the forthcoming election.

According to the PDP BoT Chairman, the opposition party has a conflict resolution mechanism with which to handle its problems.

Members of the PDP BoT, who were part of the delegation are former governors of Enugu and Kogi states, Okwesilieze Nwodo and Alhaji Ibrahim Idris.