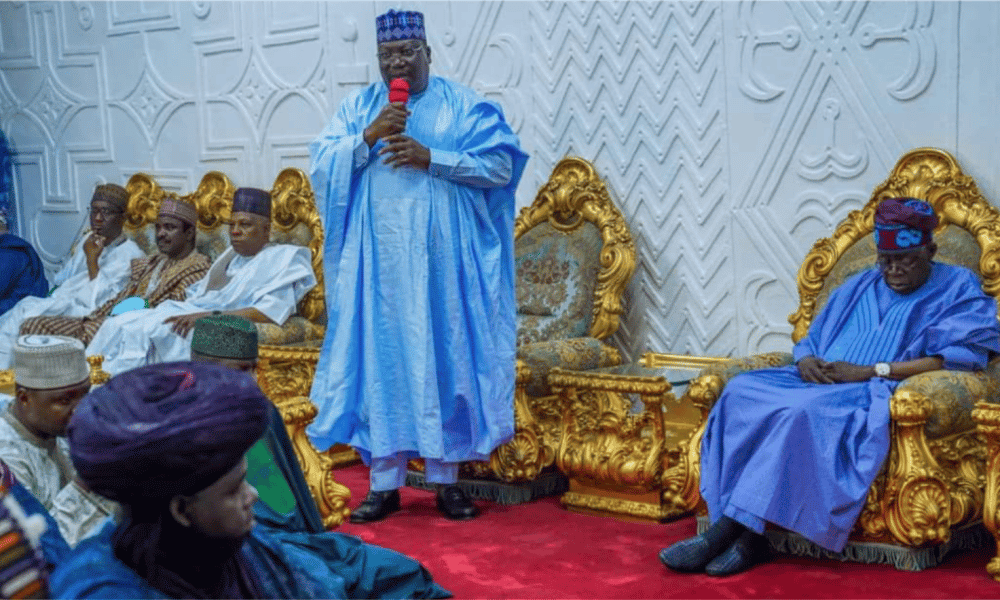 The All Progressives Congress (APC) presidential candida, Bola Tinubu, has been criticized by many Nigerians for dozing off on Saturday, during a meeting with the Emir of Gombe, Abubakar Shehu-Abubakar.

Naija News reports that some Nigerians have consistently raised concern about the frailty of Tinubu’s health as not fit to become president.

Tinubu, who was in Gombe to attend the wedding of Misbahu Inuwa Yahaya, son of Governor Muhammadu Inuwa Yahaya, decided to stop by for a brief homage and political meeting at the Emir’s Palace, accompanied by political bigwigs including Senate President, Ahmed Lawan.

During the meeting, Tinubu was captured sleeping while Lawan was seen holding the microphone and addressing attendees in the emir’s palace.

This has generated outrage online with many critics saying it is another evidence of his weakness and possibly needs rest, instead of running for president.

@Galafi_Hamma write: “Just a trip by flight from Abuja to Gombe tinubu started sleeping at Emir’s Palace. Everyone was shocked and sad at the palace”

@firstladyship wrote: “I told you that daddy doesn’t sleep until like 4am in the morning.” — Dayo Israel. Daddy finally got the Palace of the Emir of Gombe & started sleeping. Who will now wake daddy up? Call Mr valet Jags”

@Nkemchor_ wrote: “Tinubu went for a public function and was caught sleeping. What other sign do you need to know Emi lokan is a placeholder for Shettima?”

@OSAS4l wrote: “He works 20hrs daily but he sleeping at Emir’s palace.”

@elonchorch wrote: “APC drug lord and money laundering machine sleeping on duty in a small visit he went for in Gombe state. If this one tries a live interview, hell sleep off on set.”

@itx_anku wrote: “The man is weak and tired and all he needs is to get rest at his house in Lagos or anywhere not in the race to be in Aso Rock where only strong, vibrant and strength leaders are needed.”