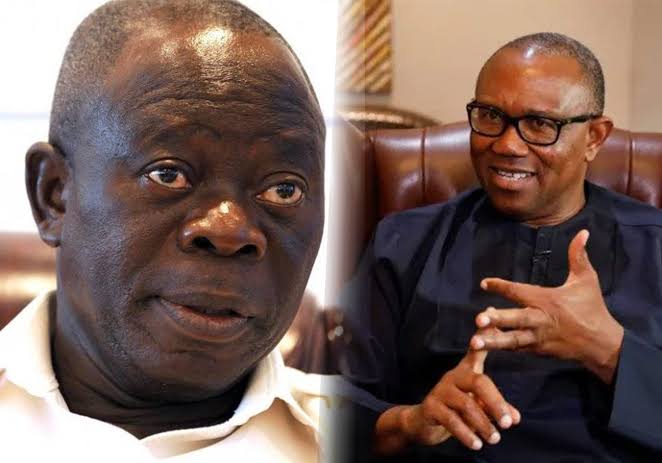 The Obidient movement has reacted to claims from a former governor of Edo State, Adams Oshiomhole alleging that the Labour Party (LP) presidential candidate, Peter Obi did not tackle insecurity when he was the governor of Anambra state.

Naija News recalls that Oshiomhole while speaking during the youth conference of the ruling All Progressives Congress at the International Conference Centre in Abuja, said that Bakassi boys started during Obi’s tenure but he could not do anything to put the group to an end.

Reacting to Oshiomhole claims via a statement from the office of the Obi-Datti media, the group directed the former governor to the commendations of former IGP, Abubakar Muhammad.

They argued that Oshiomhole did not verify his claims before making a public statement as Obi was on record to have been the most ruthless governor security-wise.

The statement reads: “The former Edo Governor also in his groundless outburst to satisfy his audience, claimed that it was Obi’s successor, Willie Obiano, who was able to solve some security challenges that Obi could not tackle.

“If Comrade Oshiomhole had bordered to verify Obi’s security records as Anambra state governor, he would have found what the Inspector General of Police in 2014, Abubakar Mohammad said in Awka, Anambra state capital on April 10, 2014 shortly after Obi left office that was copiously captured by many mainstream and social media establishments on April 11, 2014.

“Oshiohmole but for mischief would also have found that Obi is on record to have been one of the most ruthless state Governors in tackling the kidnap menace in the country. It’s still green in everybody’s memory how Obi personally supervised the sealing off and demolition of hotels and buildings used by Kidnappers and other criminal gangs in the state. Crime record in Anambra state under Obi was outstanding and security leadership never failed to appreciate this feat.”