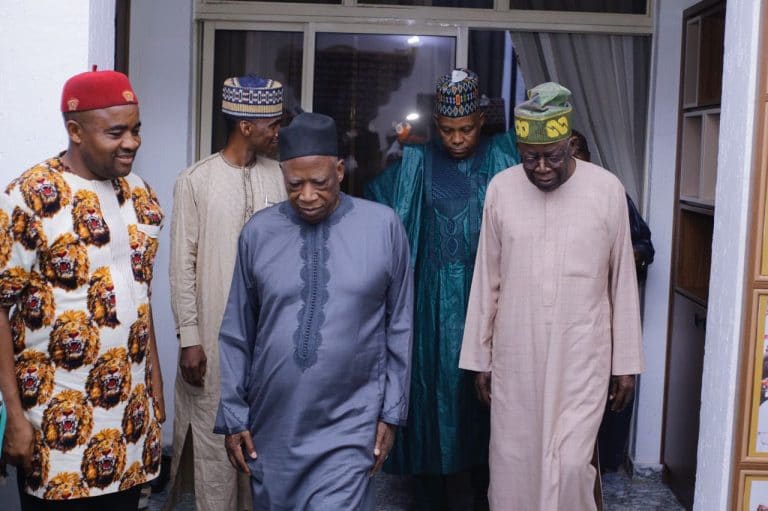 Details have emerged revealing that the National Chairman of the All Progressives Congress (APC), Abdullahi Adamu, is currently facing a tough battle to keep his job as the leader of the ruling party.

This is coming as the APC battles an internal crisis that has resulted in its failure to hold the National Executive Council (NEC) meeting and ratify the campaign council list of its presidential candidate, Bola Tinubu, days before the official kickoff of political campaigns.

With many stakeholders of the APC expressing concern that the party is still yet to put its house in order, many have slammed President Muhammadu Buhari over his decision to leave for the United States of America, to attend the United Nations General Assembly function.

Sources in the ruling APC accused Senator Abdullahi Adamu, who is expected to consult with President Buhari and announce a date for the NEC meeting, of foot-dragging.

“Adamu is perturbed that governors and other organs of the party could force him to resign during the NEC meeting, to pave the way for a Christian national chairman,” a source told Daily Sun.

Though the source refused to reveal if Tinubu has changed his mind on plans to oust Adamu, the source disclosed that last week’s discreet meeting between Tinubu and members of the National Working Committee (NWC)-led by the APC Chairman was part of moves to build a support base for his seat.

He said: “We are running against time. Campaigns are about to start and the APC is yet to put its house in order. Adamu who should be at the forefront of leading a serious reconciliation is busy fighting to remain in office.

“Since the emergence of Tinubu, APC has been in one form of trouble or another. There is no single former presidential aspirant who has openly endorsed Tinubu. Even governors who supported him during the primaries are laid back. Many of them are secretly working for Atiku. We know. At least, NEC meeting will resolve these crises. APC needs a united house to go into this election.”

Speaking on the alleged internal crisis rocking the ruling party, the National Publicity Secretary of the APC, Felix Morka told Daily Sun: “APC has not set a day for its NEC meeting. When that is announced, we will definitely make it public. For now, no date has been determined for the NEC of the party to meet at this time.

“Campaigns haven’t started, INEC has not lifted the ban on campaigns. To suggest that senior members of APC are not campaigning is not true. Vice President Yemi Osinbajo is a busy man.

“There is no rift. All the aspirants are fully committed and we will win the elections next year,” he said.