Since the publication more than half a century ago of a landmark article that referenced the “vanishing American Jew,” it’s been hard to shake that idea as the dominant narrative of American Jewish life.

Yet the U.S. Jewish community is the largest in the world, with an estimated 7 million Jews — slightly more than Israel’s 6.8 million.

And despite a low birthrate, American Jews actually are growing in number, primarily due to three factors: immigration, intermarriage and education.

Over the past three decades, Jewish immigrants have come in large numbers from the former Soviet Union, Latin America and Israel. Intermarriage, rather than acting as a net negative for Jewish population, actually has resulted in more Jews, as the children of intermarried parents increasingly identify as Jewish and some spouses convert. And Jewish education has helped retain the numbers of Americans who identify as Jews — and drawn some “Jews by choice” into the fold.

“The narrative of the Jewish community that we are a disappearing people — Look magazine famously referred to us [in 1964] as the ‘Vanishing American Jew’ – is not true,” said Leonard Saxe, a demographer at Brandeis University’s Cohen Center for Modern Jewish Studies. “What we know is that the American Jewish population is growing substantially, and we know where they are living, how old they are and their political attitudes. We also know that American Jews are increasingly diverse, both in their demographic characteristics and how they enact their Jewish identities.”

The increasing diversity of American Jewry is apparent in myriad elements, including national origin, race and ethnicity.

“We are not just descendants of European Jews,” said Arnold Dashefsky, director of the University of Connecticut’s Center for Judaic Studies and Contemporary Jewish Life. “Therefore, planners need to reflect on how their policies can accommodate the diverse nature of American Jewry.”

Dashefsky estimates that 10% of American Jewry is Sephardic and another 5% is comprised of “nonwhite Jews” from Poland, Russia and Ukraine, such as Bukharian Jews. Jews of color – a broad term that encompasses African-American Jews, Ethiopian Jews and others – may constitute 12-15% of American Jews, according to researchers at Stanford and the University of San Francisco who in 2019 examined 25 population studies of American Jews and found that most likely undersampled nonwhite Jews. 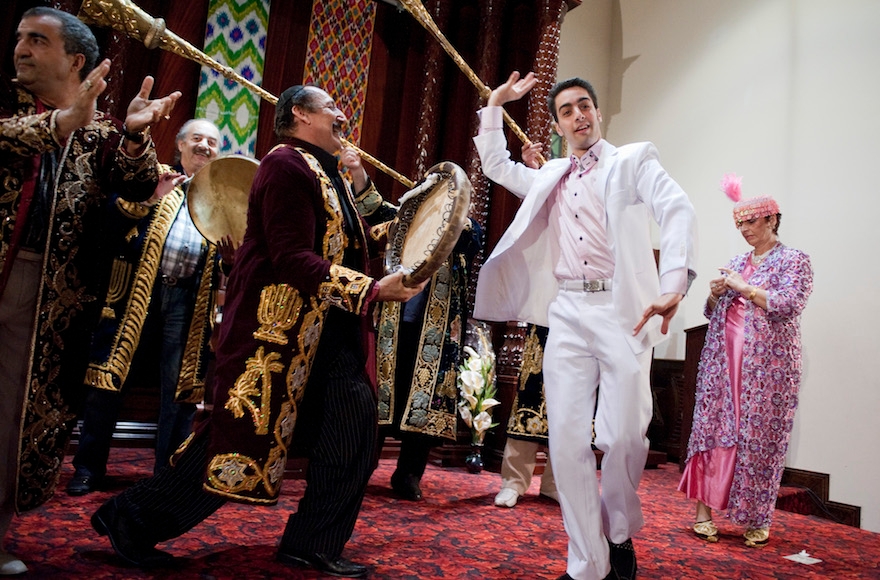 Dancers perform at a celebration at the Ohr Natan congregation of Bukharian Jews in the Rego Park section of Queens, New York. (Tom Williams/Roll Call/Getty Images)

“The Jewish community has consistently been inconsistent with respect to how it attempts to account for Jews of color within the American Jewish community,” Ari Kelman, an associate professor of education and Jewish studies at Stanford, told JTA last year.

The United States also has an increasingly vocal, visible and vibrant Israeli population. A landmark study of the nation’s Jewry in 2013 by the Pew Research Center estimated that 100,000 Israeli-born Jews are living in the U.S., similar to the estimate of the National Jewish Population Survey in 2000-01.

But according to an analysis of American Community Survey data conducted by Ira Sheskin, director of the University of Miami’s Jewish Demography Project and author of dozens of Jewish population surveys, there actually are some 350,000 Jews with Israeli roots in America. Many are concentrated in communities with large Hebrew-speaking communities, including Northern and Southern California, New York and New Jersey, South Florida and Boston, but plenty of Israelis are scattered elsewhere across the country.

America has other sizable Jewish communities where the native tongue is not English. Russian-speaking Jews live in large concentrations in New York City. Spanish-speaking Jews reside in large numbers in South Florida, including immigrants from Argentina and Venezuela who have arrived during the past two decades. Los Angeles has a large Persian-speaking community, the result of an exodus of Iranian Jews following the 1979 Islamic Revolution.

The increase in America’s Jewish population comes despite the low fertility rate among American Jews, which has been in decline since the 1970s and generally is lower than Americans.

During the baby boomer generation of 1946 to 1964, most Jewish households had two or three kids, according to Sheskin.

“But now, Jewish women are averaging 1.9 children each and not all are raising them as Jews,” he said. “As a result, the effective Jewish fertility rate is 1.4 per woman.”

The majority of U.S. Jews live in four states: New York, California, Florida and New Jersey, according to the American Jewish Year Book. The states with the fastest growing Jewish population are Florida (up 200,000 in the past 40 years) and New Jersey (up 100,000 over 40 years).

U.S. Jews are highly educated: About 60% have a college education, compared with 32% of the general public, according to surveys. And among those aged 25 to 34, Sheskin said, 85% either have a college degree or have started college.

One major factor contributing to American Jewish growth is changes in attitudes toward intermarriage.

“Intermarried families are, for the most part, accepted in the community,” Saxe observed. “I like to say that intermarriage no longer requires that they have to give up their Jewish passport.”

After the 1990 National Jewish Population Survey alarmed Jewish leaders with its finding of an intermarriage rate of 52% among American Jews (subsequent scholarship revised the figure down to 43%), the community was galvanized into action.

Interfaith marriage, rather than acting as a net negative for Jewish population, actually has resulted in more Jews, as the children of intermarried parents increasingly identify as Jewish and some spouses convert. (Shutterstock)

Improvements in demographic methods for finding and counting American Jews also have helped researchers acquire a more accurate picture of the Jewish community, he added.

“We are better able to study Jews. We have the ability to find them – including those who are not part of the formal Jewish community,” Saxe said. “We are applying new statistical tools to understand it and we are looking at different ways people are Jewish – not just membership in synagogues but culturally, through membership in Jewish community organizations, advocacy groups and the study of Jewish literature and texts.”

About 60% of American Jews identify with one of the three main U.S. Jewish religious denominations: 35% as Reform, 18% as Conservative and 10% as Orthodox. Orthodox Jews comprise the fastest-growing of these denominations, owing largely to their birthrate of 4.1 children per family, according to the Pew Research Center. A landmark 2011 study of Jews in New York, by far the country’s largest community, found that 61% of all area Jewish children were being raised in Orthodox households.

When it comes to politics, a large majority of American Jews vote Democratic. An election-eve survey of 1,334 Jews released in October by the American Jewish Committee found that Jews planned to vote for Joe Biden over Donald Trump by a margin of 75% to 22%. In 2016, Hillary Clinton took most of the Jewish vote: 62% to Trump’s 16%, according to an AJC survey.

October’s AJC survey found that the most pronounced differences among Jews were based on religious affiliation: Trump’s support among Orthodox Jews was 74%, compared to 23% of Conservative Jews, 20% of Reform and 14% of self-identified secular Jews. Biden was favored by 18% of Orthodox Jews, 72% of Conservative, 78% of Reform and 83% of secular Jews.

As with Americans generally, the number of American Jews who identify as political independents is growing. In the October survey, 53% of respondents identified as Democrats, 14% as Republicans and 25% as independents.

As for Americans generally, 2020 was a year of great change for the country’s Jews. Because of their heavy concentrations in the Northeast, American Jews are estimated to have suffered disproportionate numbers of fatalities during the first wave of the COVID-19 outbreak. The pandemic also has taken a heavy financial toll: 43% of Jewish households lost a job or experienced a pay cut, compared to 42% of all U.S. adults.

The full scope of the pandemic’s impact on American Jews, as on Americans generally, has yet be determined.

Xi warns Biden and EU not to reignite Cold War