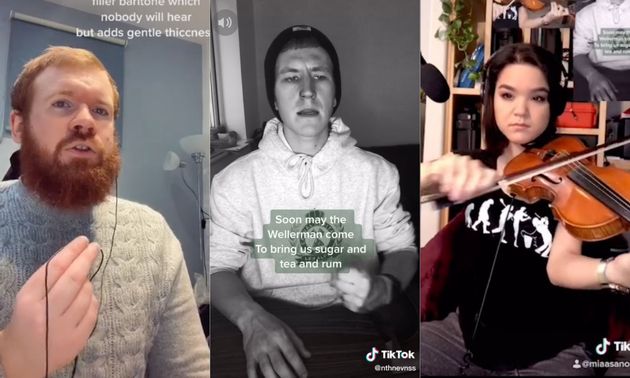 Thank goodness for TikTok in these trying times.

During the truly wild year that was 2020, TikTok brought us much needed levity, from longboarding with cranberry juice to “Dreams” to the “Ratatouille” Musical.

In 2021, TikTok has taken an unexpectedly naval turn into sea-shanty obsession.

Yes, that’s sea shanties, as in the songs sailors used to sing back in the day while at sea. We’re talking about the “yo-ho-ho and a bottle of rum” of musical genres.

And that’s where things got really interesting.

Thanks to the app’s duet feature, more users joined Evans in the song — a lot more users. The 26-year-old postal worker was joined by voices around the world, from deep baritones to high melodies  — and even a fiddle.

Eventually, the song had a whole band and multi-part harmony. And it’s pretty dang magical.

So #ShantyTok was born. Also known as Sea shanty TikTok, can best be described as the platform’s new obsession with sea shanties.  From continuing to add to Evans’ original “Wellerman” recording, to remixing popular songs into sea shanties, TikTok users are finding new and creative ways to share their shanty love.

What is a sea shanty?

The word shanty comes from the French verb “chanter,” which means to sing. The songs we now characterize as sea shanties were traditionally sung collectively by merchants, sailors, fisherman, pirates or whoever found themselves on a boat with a voice.

There’s a reason sea shanties slap so hard. They are easy to pick up, easy to sing, and repetitive, and they can communicate important information between workers. Usually they involve a call and response, that could easily be executed with a group of workers on a ship.

Sea shanties are, at their core, labour songs. They’re about moving together and working together as a common whole. A group of people united with a common cause, singing together and driving themselves forward. Sea shanties were originally designed to help sailors  hoist sails in unison or row. Everyone does their part, and the whole is so much more than the sum of its parts.

The sure sounds like something we all could use a bit of right now.

Sea shanties have had their fair share of modern love. Players of the video game “Assassin’s Creed: Black Flag” collected original sea shanties throughout the game’s storyline, and bands like Canada’s own Great Big Sea have found success in the musical style.

But TikTok has leaned hard into the sea-shanty renaissance in the first weeks of 2021, and brought it to a whole new level.

2021 is the year of the sea shanty pic.twitter.com/ohOAGvkbtC

“Macaroni in a pot, yo-ho! That’s a Wet-A-P” may be the best phrase ever sung (apart from the original).

Even the Washington Post’s official TikTok guy got onboard the sea shanty ship.

The love of sea shanties has  spread to other corners of the Internet, sparking a whole new appreciation for the musical genre. According to Google Trends, “sea shanties” is being searched more than ever before.

Sea shanties are more searched now than at any time in Google history 🌊 ⛵⚓ https://t.co/8vvjzxUfKu#shantypic.twitter.com/wVcLxpYRRO

And everyone  has a newfound appreciation for some very old songs.

more jobs should have shanties

okay I made an approachable sea shanty playlist for people who want to get into sea shanties. some real bangers here folks https://t.co/XaOqVHuWm2pic.twitter.com/qTQiGD2q1A

i thought sea shanties might be trending because everyone else has the thought that they would like to take to the ocean right now and perhaps never return, but it is not that

I’m from the prairies and didn’t ride a boat until well into my teens. But I can say whether you’re an actual sailor or just the last Saskatchewan pirate, sea-shanty TikTok will welcome you with open arms.

So grab an oar and join the party, ya landlubber! Soon may the wellerman come, and soon may we get through this tumultuous time together.